A number of events which make up Dominica’s Independence have been axed this year.

The Cultural Division has release the list of activities for the celebrations this year but events like National Wob Dwiyet, Madam Wob Dwiyet and Ti Matador show are off. Additionally, the annual Heritage Day has been scrapped.

These events join the signature Creole In The Park (CITP) and the World Creole Music Festival (WCMF) which were pitched off the cards due to the effect of Tropical Storm Erika.

However, events such as the NCCU Cadance Lypso competition as well as the Creole Bod Lame remain (see list of activties below).

Market Day with a Difference will be held in Marigot, Portsmouth and Roseau.

Meantime the 4th annual E.O Leblanc memorial lecture to be held on Thursday 8th October 2015 will get the ball rolling for the celebrations.

This is followed by two days of island wide prayer and thanksgiving and an entire week dedicated to Dominica’s history will be held under the theme: The road to independence 1950-1978 from Monday 12th October to Friday 16th October 2015.

Every Friday will be observed as creole wear (Had Kweyol).

The theme of this year’s Indepedence celebrations, which runs from October 8 to November 4, is ‘Rebuilding Dominica Together.’ 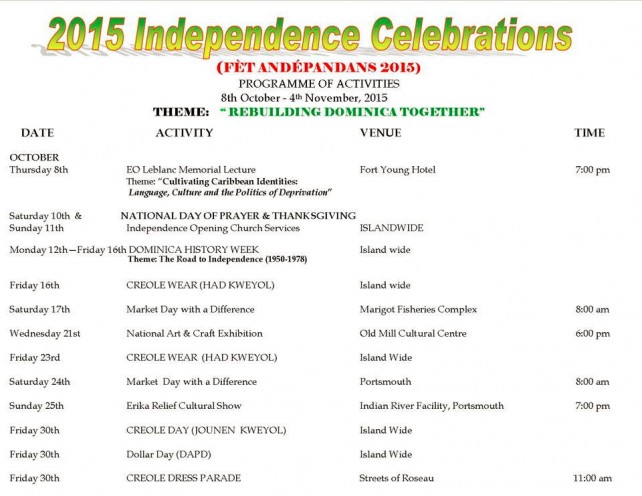 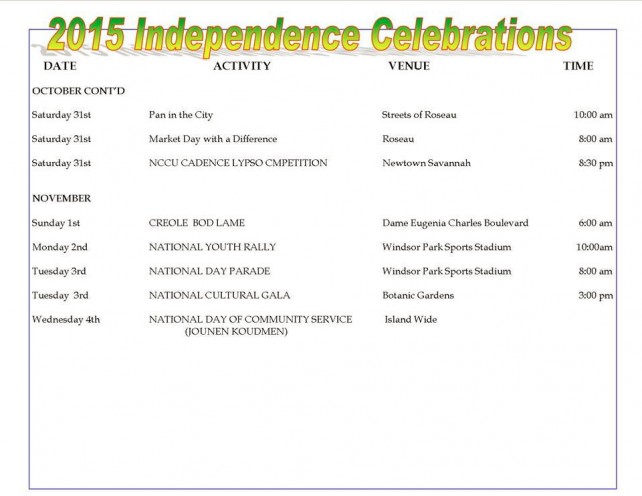