For just over a week now, Francis “Major” Richards, one of three wood-scroll saw artists on island, has been scrolling away at a special plaque to commemorate Dominica’s  first International Test Cricket game schedule for July 2010.

“It is my contribution as the President of the Dominica Arts and Craft Producers Association (DACPA) to the further development of the arts and craft industry in Dominica,” said Richards who also manages the Windsor Park Sports Stadium.

By all reports the project has received favorable reviews by the West Indies Cricket Board who is showing great interest in it.

Richards has already made what is to him a special trophy and gift to those who can complete the entire hike of the Waitikubuli National Trail.

For Richards, who refers to himself as a ‘scroll saw artist’, wood scrolling is a hobby, but when he speaks of the economic potential of the art industry he gets serious. “I want to make other artisans more acutely aware, especially the members of the DACPA, of the tremendous potential which exist to bring out their creativity for income generation. There are lots of opportunities along the length and breadth of the trail just as the test cricketing matches, and this is just two examples of things happening in Dominica that we can utilize.”

One of Richards’s major objectives is to ensure that Dominica art and craft products are “Made in Dominica.” 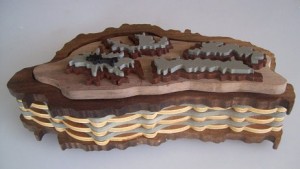