President of the Dominica Football Association (DFA) Glen Etienne has revealed that the issue of insurance for the women taking part in the Women’s football league will be fully covered by the DFA from August 2019.

Etienne made his comments at the Football House in Bath Estate where he gave eight football clubs each, a full set of football uniforms and a check of one thousand dollars.

“Over the past years, the issue of insurance for the women taking part in the league has always been a major concern and we, at the Dominica Football Association (DFA), have decided that from August 2019, all the women taking part in the DOMLEC Women’s Football league will be insured,” Etienne said. “We are not going to ask the clubs to give us a subvention…we will make it compulsory that all the players will be insured in the 2019/2020 football season.”

On the issue of the uniform, Etienne stated that in the past, they have been borrowing uniforms for the women’s team, now this is something in the past.

“We also used to give them men’s uniforms but this uniform is specially designed for the women…I want to also tell you that despite a few challenges that we have been facing as it relates to the DOMLEC Women’s Football League, we are committed to having the league fully completed,” the DFA Boss stated.

Etienne indicated that the heightened political events now taking place in Dominica are affecting the smooth running of the league. He says this has created some issues for the league since the political parties are using playing fields for their political rallies.

“As we speak, our national women’s team is in training for the Windwards tournament for June 26 – July 7 under the coach, Albert Titre said. “We always take part in the Windwards Women Football Tournament and we expect our girls to do well,” Etienne said. There is a lot of football generally for women CFU Under 14. We are also going to have regional football centers in Dominica where the young girls will be mentored from an early age.” 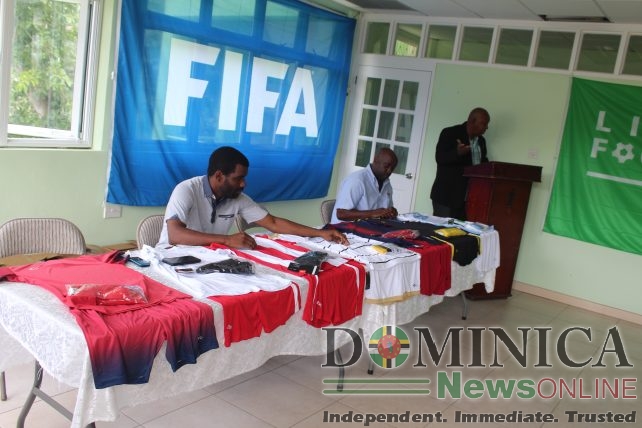