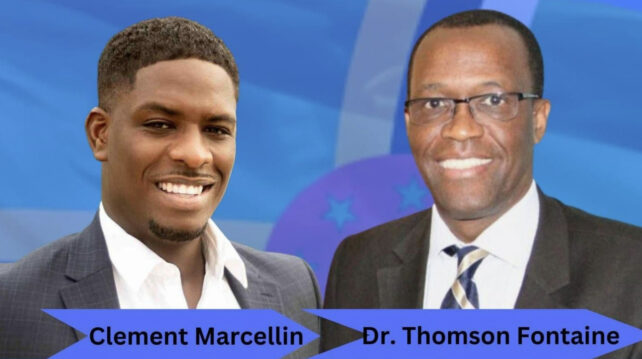 The contest for the position of political leader of the United Workers Party (UWP) is now between Clement Marcellin and Dr. Thomson Fontaine as Dr. griffin Benjamin has dropped out of the race. He made the announcement last night on the UWP ‘Workers Voice’ programme on Q95 Radio.

So, on Sunday November 27, the United Workers Party, at its delegates conference to be held at the Goodwill Parish Hall, will elect either Thomson Fontaine (UWP candidate in Grand Fond/Riviere Cyrique in the 2019 general election)  or Clement Marcellin (UWP candidate in Vieille Case in the 2019 general election) to replace former political leader Lennox Linton, who resigned at the end of September this year.

As a result of Dr. Benjamin’s withdrawal, this poll has been modified to reflect the fact that the contest will now be between Dr. Thomson Fontaine and Clement Marcellin.

Note however, that based on the Constitution of the United Workers Party, nominations may still be entertained from the floor at the delegates conference.

If you’d like to indicate the reason(s) for your choice, you may do so in the comments section of this story or on the DNO Facebook page.

The results will be announced on Saturday, November 26.

Please note that this is not a scientific poll and is not intended to predict the result of the election for political leadership of the UWP.