Dominica has signed an agreement with the World Bank for the financing of the Geothermal Development Project.

The project amounting to $27 million was signed between Regional Director for the Caribbean, Latin America and the Caribbean Region, Tahseen Sayed Khan and Prime Minister and Minister of Finance Roosevelt Skerrit at a ceremony held  at the Financial Centre earlier today.

This project will include the construction of a 7 MW geothermal domestic power plant.

“Under this project, the public will see coming to their homes electricity generated from the use of geothermal energy, ‘clean energy’,” Skerrit said while addressing the ceremony.

He added that this is the fourth agreement that Dominica and the world Bank have signed since the passing of Hurricane Maria in September 2017, with the previous agreements being for housing, agriculture and small business support.

“The signing of this agreement today, is another milestone in our quest to develop the geothermal potential of Dominica,” he stated. “The approval of the financing allows us to move swiftly towards the construction of the domestic plant.”

He said the geothermal project is a perfect example of how development partners working together with government can collaborate to bring important development programs to reality.

Skerrit revealed that in the next few weeks, the government will be engaged in a number of activities including the selection of the contractors and working towards the accomplishment of the conditions for effectiveness of the loan.

“In the process we’ll complete the land acquisition and finalize the power purchase agreement with DOMLEC, and complete the concession agreement as well,” he stated.

The prime minister stressed the importance of geothermal development to the country’s goal in becoming the first climate resilient nation of the world.

“Everything we are doing in Dominica has to be climate resilient as we cannot afford to rebuild the country every two to three years. This project will help us diversify our energy mix and invest in greener and more reliable energy source, so we can be uand running shortly after a storm,” Skerrit said. “We expect therefore that the use of clean, green energy and the reduction in the use of fossil fuels will enhance and protect the environment.”

He said moreover, his government’s investment in other sectors will greatly benefit from the geothermal energy.

“All our investments in new hotel infrastructure, the new schools being built, the new Smart Health Centres, the new National Hospital, the new housing complexes, all of these will benefit from the availability of clean and green energy,” he explained.

He thanked the World Bank for its commitment and for working with Dominica over the last few years on this project. 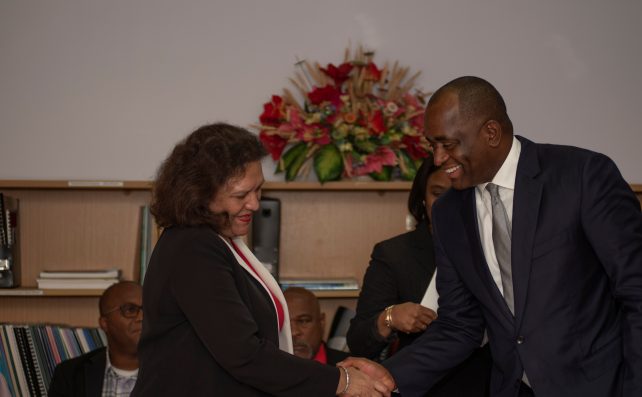 Meantime, Regional Director for Latin America and the Caribbean Region, Tahseen Sayed Khan said this is the first World Bank Group Funded Geothermal Project in the Caribbean in 30 years, “so this is a very important milestone for pursuing the agenda of renewable and the demonstrable commitment of Dominica’s goal of becoming climate resilient.”

According to her, the World Bank is hopeful that this investment has the potential over time to further expand geothermal outputs that could potentially be used as an economic diversification tool for export purposes.

She went on to say that one of the key aspects that the World Bank and other partners often talk about with Caribbean countries, is the diversification.

“We are looking forward to a very successful implementation of the geothermal risk mitigation project,” she stated.

Dominica has a small power system that relies heavily on diesel to produce electricity. The average price of electricity on the island is amongst the highest in the world, around US$33 cents/kWh as of December 2016 and customers are exposed to the volatility of international oil prices.

Geothermal is more cost-efficient, climate resilient and greener. Following Hurricane Maria, 75 percent of the power network was damaged, leaving the whole island with no electricity. In response, the government adopted the National Resilient Development Strategy, which sets Dominica’s vision to become “the first climate-resilient country in the world”.

Diversifying the energy mix is a key element of this strategy.The Geothermal Risk Mitigation Project is expected to significantly lower electricity costs in Dominica and increase the share of renewable energy in the country’s energy mix from 25 to 51 percent, reducing greenhouse gas (GHG) emissions by 38,223 tons of CO2 per year. It will also assess the potential to export homegrown geothermal energy to its neighbours. 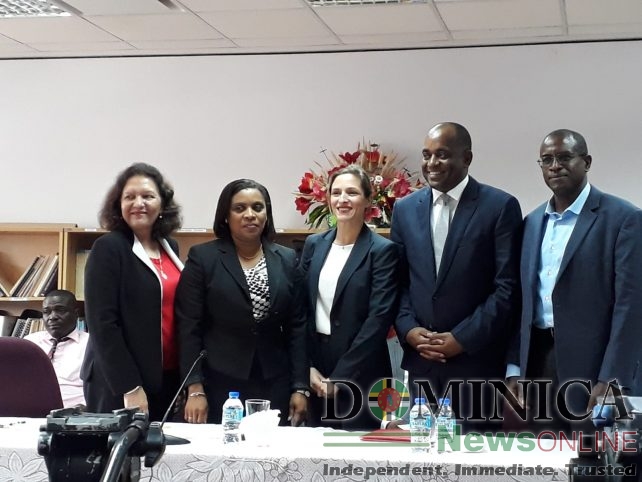