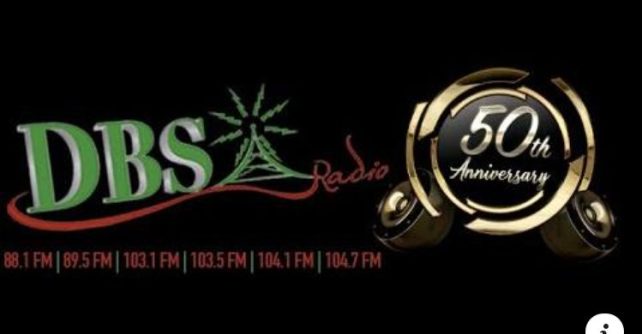 Acting General Manager of DBS Steven Dangleben said the staff at DBS feel proud to have made a momentous contribution to the development of Dominica by providing credible, accurate and reliable news and information to the public and to be celebrating its anniversary at a time when Dominica is celebrating its 43rd Anniversary of Independence.

The radio station which transitioned from being part of the Windwards Broadcasting Service (WIBS) to Radio Dominica in 1971 and then became the Dominica Broadcasting Corporation a few years later, celebrated its 50th anniversary on Monday, November 1, 2021.

“Our Golden Jubilee marks a remarkable achievement,” Dangleben said. “Fifty years is a milestone and this could not be realized or achieved without the tremendous support of our listeners and we are grateful.”

He said the station was not able to have a grand celebration this year since most of the activities had to be shelved because of Covid-19.

However, Dangleben said “we could not have allowed our anniversary day today, to pass by without making a joyful noise and to get our listeners involved.”

As part of the celebrations, some past staff members were invited to read news, to participate on the various shows and listeners were given the opportunity to win prizes.

Dangleben stated that additionally, throughout the course of the day, there were interactions with some of DBS past managers and past staff members overseas, including Ted Daily, Steinberg Henry, Ransom Cuffy, Brian Meade and Gordon Henderson, among others.

“We will also remember the contribution of some of our fallen comrades like Felix Henderson and Kurt Matthew,” he revealed.

The inability to celebrate in a grand manner not withstanding, Dangleben said DBS staff are delighted with the contribution that the station has made to the socio-economic development of Dominica.

“And so on behalf of management and staff, Board of Directors of DBS we thank all those who have made a meaningful contribution in the evolution of the station and we also thank God who has seen us through our good days and our rough days,” the acting general manager said.

Dominica Broadcasting Corporation is the national radio station of the Commonwealth of Dominica. The service, owned by the government, is headquartered on Victoria Street in the island’s capital, Roseau.