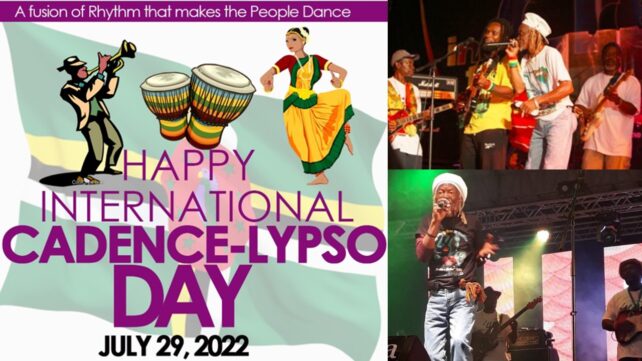 Dominica is celebrating Cadence-Lypso Day today with the commencement of a cadence-lypso tribute festival to be held this weekend from the 29th-31st at Windsor Park Sports Stadium.

The undisputed Kings of Cadence -Lypso music, Midnight Groovers will be honored tonight.

“I want to first of all say Happy International Cadence-Lypso Day to all Cadence-Lypso icons, legends, performers, songwriters, composers, arrangers, producers, technocrats and most of all Cadence-Lypso lovers,” Founder of the Creole Heartbeat, Leroy ‘Wadix’ Charles said during a live interview on State-owned Radio DBS. “The historic chapters of our prominent musical elders intermixed with the finest blossoming talent of our Nature Isle will be chronicled at the first-ever Cadence-Lypso tribute festival from tonight.”

According to him, Windsor Park Sports Stadium forecourt will be “invaded when the tsunami of the RSB (Roots, Stems and Branches), Pato( Black Roots),  White Fayrie, Lobster and the First Serenade collide with the undisputed Kings of Cadence -Lypso music, Midnight Groovers tonight.”

He said the Godfather of Cadence-Lypso, Gordon Henderson, will present the Cadence-Lypso revolutionary soldiers as the first inductees into the Cadence-Lypso Hall of Fame, “as we strive to maintain a peaceful hypnotic ambiance at the festival throughout the weekend.”

“Creole Heartbeat has forged a close partnership with the Commonwealth of Dominica Police Force,” Charles stated.

He continued, “Patrons, especially those in the north and the west coast are asked to come in early and also advised to oblige with the security scanning process at the gate.”

He said the gate is expected to open at 7:00pm.

Charles pointed out that as a result of limited available seating,  patrons will be allowed to bring folding chairs for their comfort.

Meantime, he revealed that multitudes of French patrons began arriving earlier this week to participate in the event.