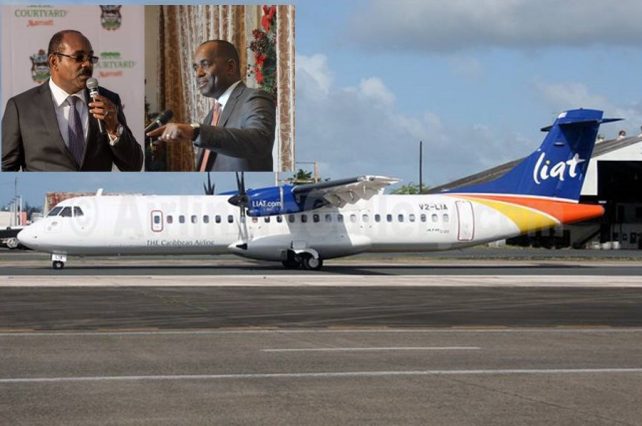 Browne sent a letter to his colleagues last week Thursday, suggesting a replacement for LIAT 1974 Limited which is expected to be liquidated

In fact, he said he plans to move ahead with the creation of the new LIAT if his fellow colleagues do not wish to pursue that option.

“If the majority shareholding group of LIAT is opportunistically, allowed to collapse this regional institution and form a new entity without honoring the institution’s liabilities to creditors; this will be a form of State banditry,” Browne wrote.

He said following the letter, which many criticized as “damning”, Skerrit responded to him favorably.

“I have heard from my dear friend Roosevelt Skerrit from Dominica…In fact he says Dominica is prepared to invest in LIAT if that’s the route we decide to go. This is a position that we welcome. So I can say that Skerrit and I would have held private discussions and he has assured me that on the basis there is a new LIAT that Dominica will invest,” Browne said on Saturday.

Browne said there are several other countries already that have indicated their interest to invest. “I don’t want to go as far as calling their names. This is no form of trickery, it is a matter of fact,” he added.

Meantime, Browne stated in his letter, that legal action to stop the liquidation should not be ruled out and he urged shareholders and creditors to push for a reorganization of LIAT.

“All shareholder governments should write off landing and other fees owed to them and the staff and other creditors should take a haircut to facilitate the reorganization of LIAT. If a bloated inefficient LIAT could have made a small loss of US$12 million last year, it stands to reason that a lean reorganized LIAT could make a profit,” Browne wrote.

Dr. Ralph Gonslaves, LIAT’s incoming Chairman and Prime Minister of Saint Vincent and the Grenadines which is one of the company’s major shareholders, has said that six airlines have expressed interest to serve the gap that could be left in the wake of LIAT’s current challenges.

Barbados Prime Minister, Mia Mottley, also confirmed that several airlines have come forward since announcements were made about LIAT’s demise.

Prime Minister Roosevelt Skerrit has said that the government and people of Dominica stand ready to support any entity that is to take over the operations of LIAT.