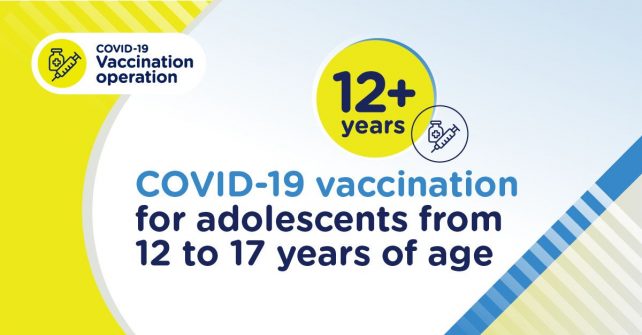 Preparations are being made to commence vaccine roll-out among 12-17 yr olds while Dominica await results of CARPHA tests on COVID variant.

With the new batch of Pfizer vaccines expected on the island anytime this week, vaccinations are set to be extended to 12 to 17-year-olds, health officials say.

Last week, the United States Embassy announced that the US Government had gifted the Caribbean Community (CARICOM) 5.5 million doses of the Pfizer vaccine of which Dominica is expected to receive an unspecified amount. This donation to the region forms part of the United States’ worldwide distribution of 80 million doses.

Speaking at a recent press briefing, Hospital Medical Director Dr Rudy Blanc stated that before the vaccines could arrive on the island, officials needed to source an ultra-cold freezer which arrived on island last week, through the assistance of the Pan American Health Organization (PAHO).

She further indicated that several health care workers who will be administering the vaccine, underwent an extensive training session this past week.

“So the groundwork is being done. Now Trust me, I am just as anxious as you are, I have those little people at my home as well who are just as eager to get their vaccine, so we’re pushing, and we’re pushing very hard to get this rollout among the teens started among that age group, “ Dr Blanc said.

Addressing the topic during a telephone interview on Tuesday morning, Prime Minister Roosevelt Skerrit called on parents who have children between the ages of 12- 17 to get them vaccinated.

Skerrit continued, “People need to keep their jobs; businesses must be able to make money because if the business is going to be forced to close by a state of emergency or by a curfew order, that doesn’t mean that they don’t have expenditure running up…so we must all do what we can to protect this country.”

On Monday, (August 23) the Food and Drug Administration (FDA) announced its full approval of Pfizer-BioNTech’s two-dose vaccine, the first-ever Covid-19 vaccine to receive this status since the pandemic began.

While children aged 12 through 15 can get the Pfizer vaccine through emergency use authorization, Monday’s approval does not cover that age range. So far, no Covid-19 vaccine has been authorized or approved for children under 12, although officials say this could come in the next few months.

Meanwhile, Dominica has sent Covid samples to the Caribbean Public Health Agency (CARPHA) to determine whether any mutations of the disease are present on island and according to health officials the results are likely to be returned sometime this week.

Prime Minister Roosevelt Skerrit also spoke about the Delta variant in an address to the nation recently.

“Indeed, in relation to what is here, we should have scientific confirmation of this over the course of the next few days, as samples have been sent abroad for analysis as to whether there was the presence of any of the known variants of the dreaded covid-19 virus, that would have contributed to the rapid spread of the virus here in Dominica in recent weeks,” he said.

Prime Minister continued, “I have my suspicion of the presence of at least one of the variants and I am proceeding on the basis that that suspicion will be confirmed.”

He added, “But it does not matter at this point, because Dominica is a part of the global community and I do expect that at some point, while we will continue to pray and hope for the very best, Dominica will be impacted by the purveyance of these many variants currently active and being transmitted across the globe.”