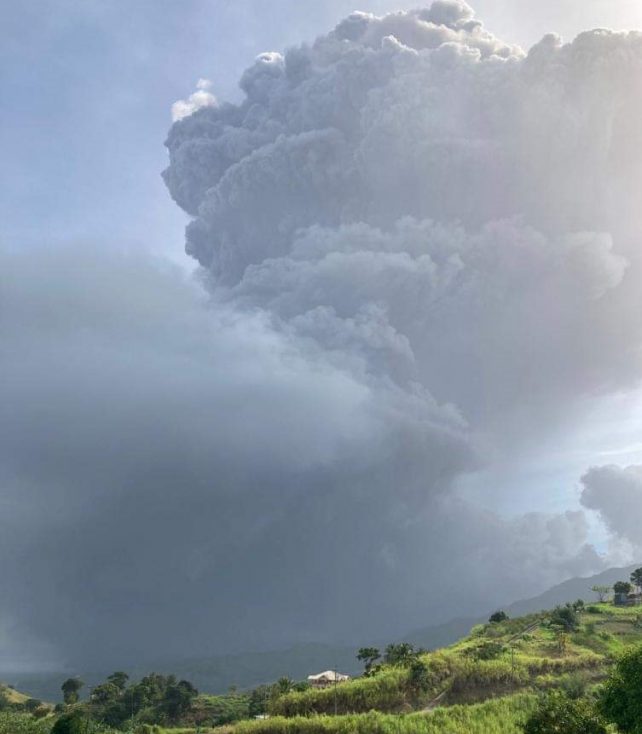 Prime Minister Roosevelt Skerrit has announced that Dominica is ready to accommodate evacuees from St. Vincent & the Grenadines (SVG) affected by the La Soufriere Volcano.

Yesterday April 8th, Prime Minister of SVG, Ralph Gonsalves issued an evacuation order for people residing in areas around in the red zone around the La Soufriere volcano in SVG.

Gonsalves made his decision on advice given to him by the director of The National Emergency Management Organization (NEMO).

The UWI-Seismic Research Centre scientific team based at the Belmont Observatory in St. Vincent had recorded six separate bands of volcanic tremor throughout the day, a new type of seismic event which had not yet been observed since the beginning of the eruption in December 2020.

According to the UWI Research Centre, this type of seismic signal is usually associated with movement of magma and fluids close to the surface. Ash venting was also observed during the most recent tremor episode.

And this morning Friday, April 9, an explosive eruption began at the La Soufrière volcano.

The UWI Seismic Research Centre said the eruption which began at 8:41 this morning, April 9, is a culmination of the seismic activity that began on April 8.

The seismic centre’s report indicates that ash has begun to fall on the flanks of the volcano and surrounding communities including Chateaubelair and Petite Bordel.

It said some of the ash has gone offshore and has even reached the team’s Observatory at Belmont.

“In Dominica’s case, we met last night as a cabinet to discuss our acceptance and to start the preparation to receive evacuees from SVG,” Prime Minister Skerrit said. “Today we will confirm the number of people that we will accommodate; certainly Dominica will be accommodating some people.”

He has identified the Moroccan Hotel, as well as several other private properties in Portsmouth, to house residents of SVG.

“I believe we have a duty and obligation to extend empathy to the people of St Vincent,” he stated.

It is said these residents would have to be evacuated for up to 4 to 5 months.

The Prime Minister said that during a discussion with Gonsalves last night, it was disclosed to him that around 20,000 have to be evacuated and an estimated 12,000 or so will be accommodated in shelters in St Vincent.

Furthermore he said the remaining 7,000 people will be accommodated outside of SVG.

“What we are doing, between last night and today, we are coordinating with member states of the OECS and CARICOM to see how many evacuees each country can accommodate from St Vincent,” Prime Minister Skerrit indicated.

He said it is a very difficult situation for the government and the people of SVG, “and it calls for all of us to extend our solidarity, our love, our empathy and love for the people of St Vincent & the Grenadines.”

“This is coming at a very difficult time with Covid-19, but this is a natural disaster and we have to respond with the love and solidarity that are required,” he remarked.