A Dominican living in Antigua and Barbuda is now picking up the pieces following a massive fire that destroyed her home over the weekend.

Darnella George her three children are now homeless after a blaze destroyed their home in Jennings.

At around 3:40 pm, the Johnson’s Point Fire Station responded to a 9-1-1 call of a house fire in Jennings.

It took 15 minutes for the firefighters to arrive on the scene, where they witnessed three homes ablaze. According to the firemen, the roof of the house from which the fire originated had already collapsed.

Corporal Amois Prince told OBSERVER that the firemen took action by trying to control the blaze at the two other houses with water, before moving on to eventually contain the house which suffered the most damage.

It took the firefighters over an hour to completely put out the fire at the three homes which were close to each other. The Johnson’s Point firefighting crew had to be backed up by the St John’s Fire Station given the size and intensity of the fire.

“They are not from the area and don’t have anybody,” Corporal Prince on Saturday referring to George and her children. “I’m not sure where they will stay tonight. It’s a real sad situation.”

The cause of the fire is yet unknown, and the houses were not insured.

“We tried gathering information, but no one is talking as to how the fire got started,” the corporal explained. 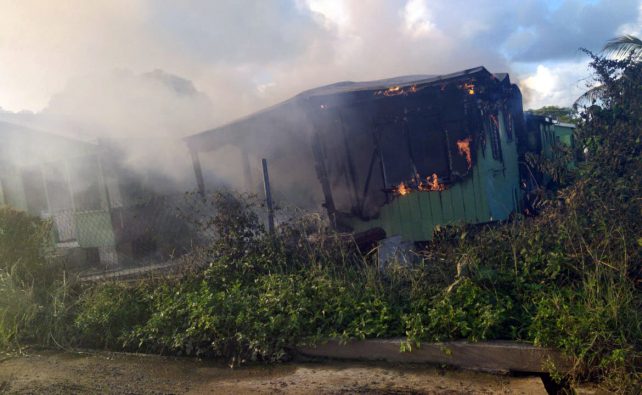 The landlord, who wished not to be named, said he had been trying to evict George for some time now due to non-payment. He had sent an eviction notice as of last week.

The landlord asserted that he will be seeking restitution through the courts in very short order as the “timing of the fire’ seemed more than suspicious in his estimation.

The firemen will begin conducting their investigations into the cause of the fire.

The link is posted below.