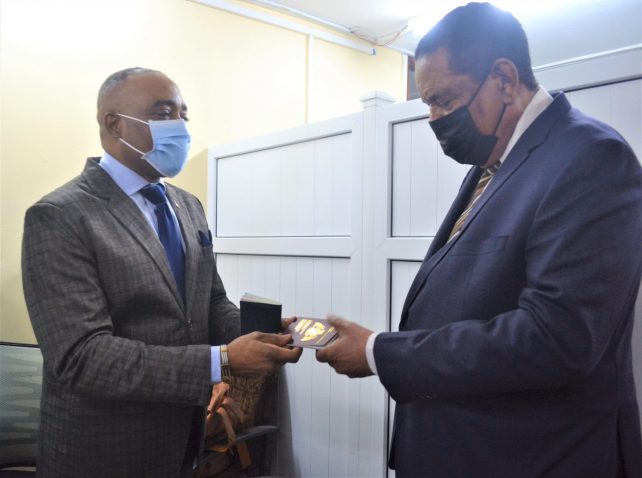 Dominica’s President, His Excellency Charles Savarin, followed by his wife, Clara Savarin, were the first to receive the new ePassport which was officially launched in Dominica on July 26, 2021.

The new passport which replaces the machine-readable one, contains both overt and covert security features that are woven into the design as well as a microchip that is used to authenticate the passport holder’s identity, adhering to the highest international standard.

According to the Canadian Bank Note Company Limited which designed and created the new passports,  they have incorporated a modern and aesthetic design that reflects the nature of Dominica and displays the country’s landmarks, flora and fauna.

“The introduction of a polycarbonate data page positions Dominica new ePassports among the most secure passports around the world,” the company stated in a message during the official launch at the police headquarters. “Furthermore, Dominica is the first country within the OECS to issue this type of book.”

Minister of National Security and Home Affairs,  Rayburn Blackmoore, who was instrumental in the project, revealed that in 2019, before the last election, government had taken the decision to inject US$6,049,000 to migrate from the machine-readable passport to the new biometric/ePassport as well as an issuing system.

He highlighted one of the benefits of  the new passport – an electronic chip embedded in it which is equipped with biometric capabilities and facial recognition.

“With these advanced security features, it will become more difficult for this passport to be duplicated by criminal elements,” Blackmoore explained.

Other perks, according to the minister, include biodata pages which are resilient to water, the laser engravement as well as 50 pages as opposed to 32 pages which the current machine-readable passport contains.

He said there will be a two year period for the phasing out of the current passport to ensure that every citizen has enough time to apply for the new passport.

“We are perfectly aware that some of us may have just renewed our passport, and it is this consideration as well as ensuring that there is a smooth transition. That is why we’ve given the people a phase-out period within which you can apply for your new passport,” Blackmoore explained. “So, therefore, everyone with a machine-readable passport will have  a period from July 26 to the 30th of July 2023 within which you can apply for a new  ePassport.”

He said for the time being, the cost will remain the same as the previous passport which is EC$150 for citizens above the age of 16 years and $75 for those under.

For diasporans who wish to make the switch to the new passport, arrangements can be made with the various embassies or directly to the immigration department in Dominica, Blackmoore indicated.

For first-time diasporan applicants, the Minister revealed that workstations will be installed within three months at the various embassies and the major population centres namely New York, London and the Dubai catchment area to ensure that persons who wish to apply for this new passport can do so.

Government’s plans, Blackmoore disclosed, also include decentralization of the application process in Dominica for locations such as Portsmouth and Marigot, among others.

He this contract with Canadian Bank Note Company Limited , includes a component to upgrade Dominica’s border security management to the tune of  US $7 million which the government is hoping to complete within the next year.

Minister of Tourism Denis Charles who was representing the Prime Minister, used the occasion to expressed the view that the economy is transforming into a modern one and “the dynamic Dominica which was promised is finally being lifted from the pages of the Dominica Labour Party (DLP) manifesto and is being manifested daily by the government’s plans, policies, programs and projects.”

Charles also described the occasion an opportune time for students focusing on tertiary education to select fields that align with the growth sectors of the Dominican economy to position themselves to take advantage of the new jobs which will become available.

Labelling the occasion as a very important step towards the technological advancement of policing and security of our borders, Ag Chief of Police Lincon Corbette stated that “the passport is very secure and will protect the holder from identity fraud. It is a more robust passport when compared to the machine-readable passport. “

He said the application process remains the same as for the machine-readable passport. Applicants are required to download the forms from the government website at www.dominica.gov.dm or pick up a physical copy at the immigration department. Applicants are also required to submit along with the applications, two passport size photos, original birth certificate, marriage certificate, certificate of naturalization where applicable and the current or the expired passport.