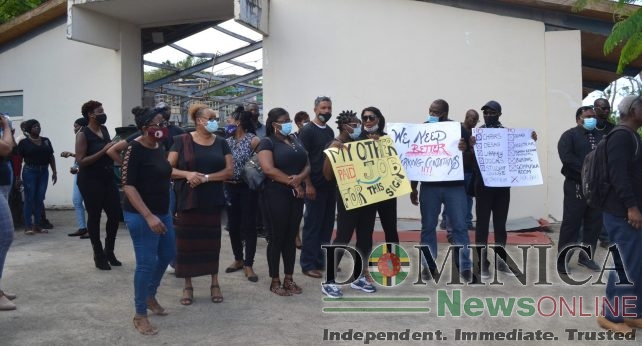 Following two days of protest action by members of faculty and staff at the Dominica State College (DSC), the employees have suspended their action subsequent to a “positive” meeting with government officials.

General Secretary of the Dominica Public Service Union (DPSU), Thomas Letang, said  a recent meeting which involved several members of government and the concerned employees produced some positive assurances for the DSC employees.

On May 10, 2021,  faculty and staff of the DSC undertook industrial action, measures which they stated were forced upon them as government and management of the college failed to address their most dire concerns.

The employees’ grievances included working conditions, the negotiation of a new collective bargaining agreement with the staff’s union in order to address the discrepancies in contracts, and the decrease in the base salary from $4000 to $3200, among a host of other concerns which they say they’ve had since 2014.

The staff vowed that their actions would not cease until their issues were properly addressed by the relevant authorities.

General Secretary of the Dominica Public Service Union (DPSU), Thomas Letang has since told Dominica News Online, (DNO) that the staff’s concerns have been heard and will soon be addressed.

Letang said the team met with the Cabinet Secretary, Careen Prevost, the Permanent Secretary in the Ministry of Education, Chandler Hyacinth, as well as Management of the DSC on May 12, 2021, and as a result, the industrial action by the employees has been suspended as the government has given their commitment to address all their concerns.

“We had a very good meeting and at the end of it, all employees were satisfied. As it relates to the payment of monies owed since 2017/2018, we have been assured that they will be paid their double bubble at the end of this month and they will receive a 3% retroactive salary at the end of June,” he revealed.

Another issue that has since been addressed is the non-appointment of a governing board for the institution as, according to the DPSU general secretary, the union put forward its nominee and the board was appointed on May 11.

“We didn’t have a functional board for the past 2 years. However a board was appointed and not only was a board appointed, we all agreed that there will be a meeting with the board, the union and government officials as well as management and staff of the college so we can look at some of the issues and bring it to their attention.”

He expressed optimism that the government will make good on its promise.

“We have seen a number of things that could not have been done in a number of years due to poor management at the college come to fruition in just a matter of 2 days. So for now we will wait to see but the action is suspended,” Letang stated.

He thanked the Cabinet Secretary for coordinating discussions and for assisting in getting to a resolution.