On Saturday morning, August 28th, Weston Moses and Kerry Alleyne paddled off of Soufriere’s waters as they had many times before. This time, however, would be different.

Moses and Alleyne, friends and business partners, were set to become the first people in modern history to circumnavigate Dominica in single sea touring kayaks.

Of course, they’re fully aware and humbled by the many natives such as the Kalinago and Arawaks who have paddled these waters before them. The Caribbean has a rich history of paddling.

In the modern-day, however, the feat remains unrecorded. 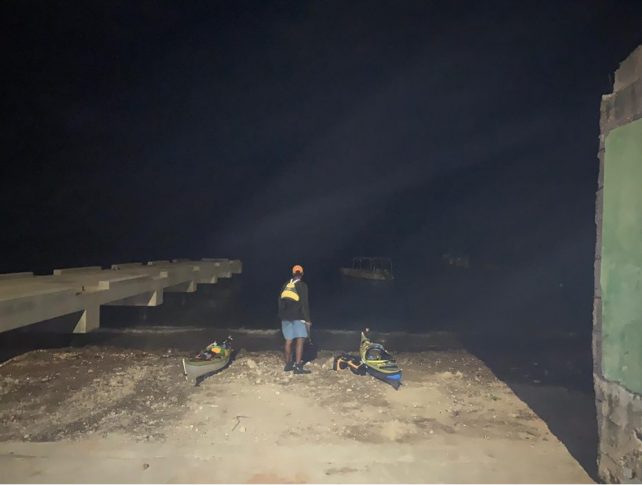 Moses and Alleyne paddled out at around 5 a.m. on Day One. When daylight arrived, the gorgeous green hills and stunning blue waters were a welcome sight. And they easily handled the gentle swells of the Leeward waters.

They encountered an abundance of marine life in the form of one massive turtle, what appeared as a gliding shark’s fin, and an incredible pod of jumping dolphins.

By the day’s end, Moses and Alleyne had covered 27 km in 5 hours and 21 minutes.

Each day, the two men set out before dawn to escape the worst of the day’s heat and elude dehydration. A previous attempt taught Moses and Alleyne that they needed to do more than store tons of water. 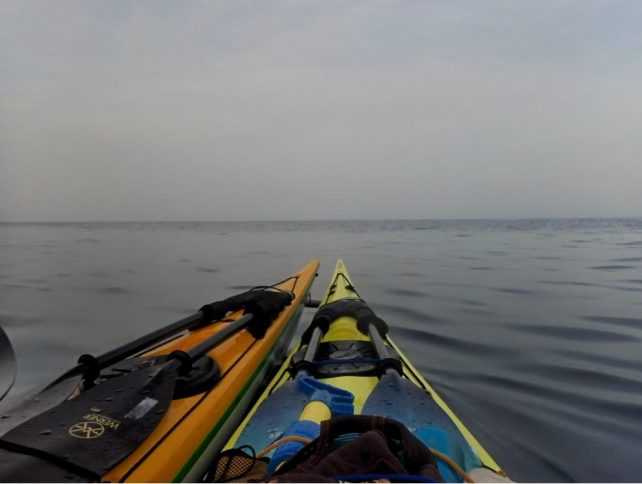 Putting Safety First On The Water

Moses and Alleyne took other necessary steps to ensure safety. They had fully-loaded kayaks with equipment that included radios, water-proof cellular phones, and a first-aid kit. They carried enough gear to camp out the entire week if there were no accommodations available.

Life jackets, spare paddles, and other water safety gear were necessities on the journey. And their friends in Soufriere could see them online at intervals thanks to their GPS satellite trackers.

Luckily, the moon was waxing, so the early mornings were not pitch black.

This expedition was well-planned beforehand, and so our marine adventurers were fully prepared for what was to come. 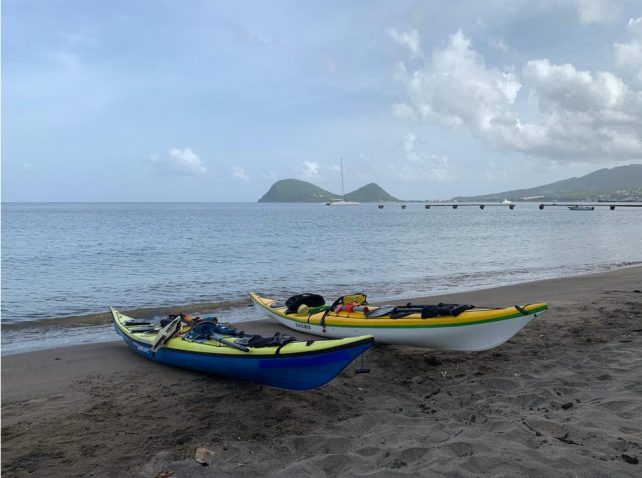 Nooks and Crannies on Day Two

On Day Two, still on the Leeward side of Dominica, Moses, and Alleyne again witnessed marine life in the form of turtles. These would become an everyday encounter.

It was their shortest day of paddling and they took the opportunity to closely explore hidden beaches, rock outcroppings, inlets, and the cliff sides. 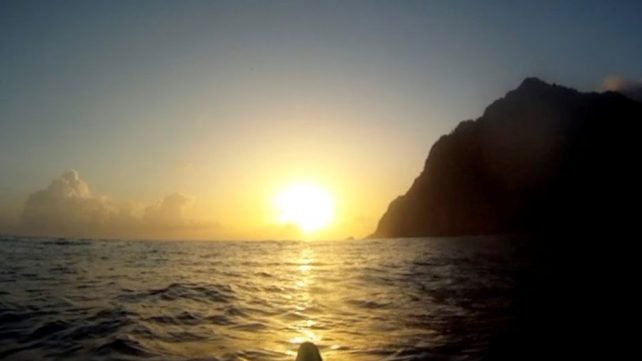 Behind God’s Back… Facing Defiance On Day Three

Moses said the journey around the island was like being in a totally different country — a marine utopia any determined person can achieve by pushing their boundaries.

And Day Three proved the most challenging of them all.

Rounding the northern end of the island, paddling into the Guadeloupe channel, the two men experientially understood the Dominican saying “to be behind God’s back.”

With the sun rising on the horizon, the steep windswept cliffs of Waitukubuli on their right, and with two waterfalls falling off the cliffs into the sea, the two felt humbled by the beauty of nature.

Soon, Moses and Alleyne were out of the Guadeloupe channel and headed to the northwest coast of Calibishie. In paddling south, an opposing current on one occasion almost matched the men’s best paddle speeds. 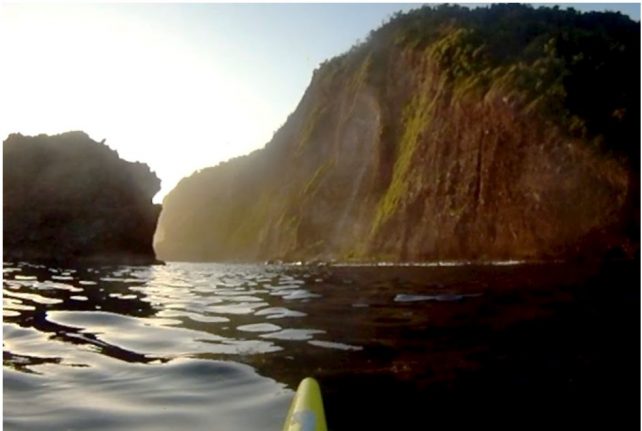 The men moved slowly, riding the waves refracting from the cliffs and unexpectedly making progress closer to the shore. Nearing Cailibishie, an unassuming riptide right in front of the guesthouse provided easy passage to land.

Moses and Alleyne later learned that several tourists had been swept away in that same location. That day they enjoyed lunch and dinner at the Verandah View Guesthouse.

The guesthouse gave them a remarkable view of the sea’s foreboding rip current below which would provide their way through the surf the next morning. 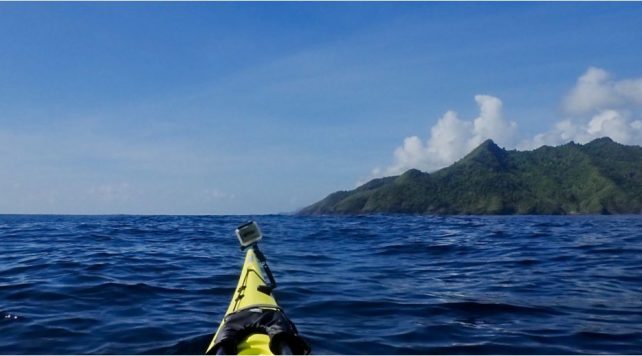 Another Challenge On Day Four

On Tuesday morning, Moses and Alleyne paddled through the Atlantic south towards Rosalie Bay.

Fishermen from within and around the Kalinago territory fished from the tall, intimidating cliffs. It was a welcomed sight to have their company on a section that provided no safe harbour for the paddlers.

Though the wind and waves were uncharacteristically calm, the waves and swells near the shore remained a challenge. Here’s an edited version of how Moses described it:

“Heading into Rosalie, there was a very heavy shore break. It was a technical landing for both of us, but we managed to get through the heavy surf safely.  It was not a landing for the faint-hearted as we both encountered some close calls.”

In all, the two courageous men covered a whopping 34 km in 6 hours and 38 minutes on day four.

While they gained the most distance on this leg, they also, unfortunately, lost a camera in the surf. 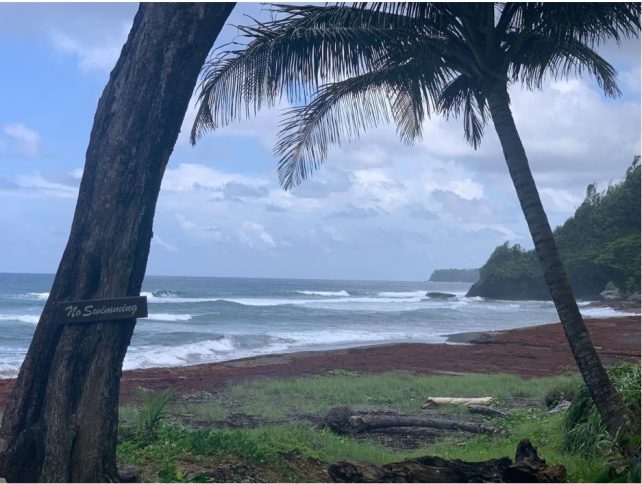 On Wednesday, the final day of their journey, they had to launch from Rosalie Bay which still had rough surf. Their start was later than usual to get a good visual on the bay which meant for a hotter day on the sea.

After analyzing the surf zone from the land, they found that the best place to launch was a protected little beach on the northernmost end of Rosalie Bay, near to where Moses had landed the day before.

This required portaging the boats across the Rosalie river, carrying all of their gear and both kayaks 600 meters down the beach, loading the kayaks, and portaging around a small rock outcropping to the beach for a safe launch.

After all that, the men still had to break through four waves before escaping the surf zone safely.

En voyage to their journey’s end, the two enjoyed a restful lunch at Stowe. They looked for the fishermen who they had met on a previous attempt but didn’t see anyone.

Through the surf, Moses and Alleyne paddled friendly ocean currents and enjoyed a slight breeze at their back all the way back to Soufriere. On the shore, friends greeted them with animated cheers. 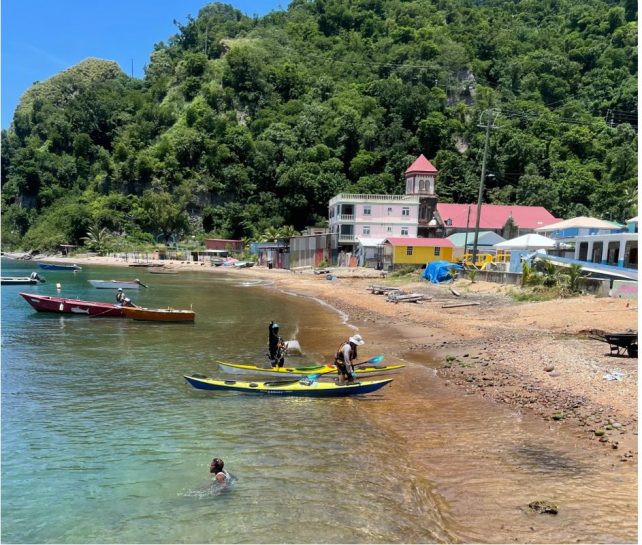 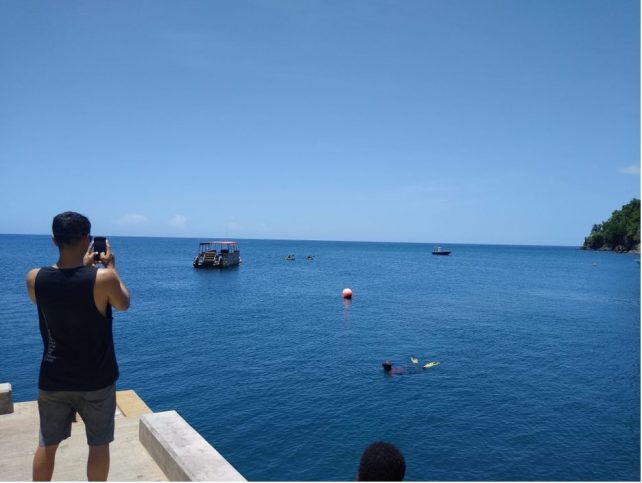 What’s Next For Our Kayakers? — Locals Join In

Not everyone has to paddle all the way around the island. For many, staying close to shore is just as exhilarating. It’s certainly enough to leave a renewed impression of the Nature Isle’s exquisite nature on those willing to push their limits. 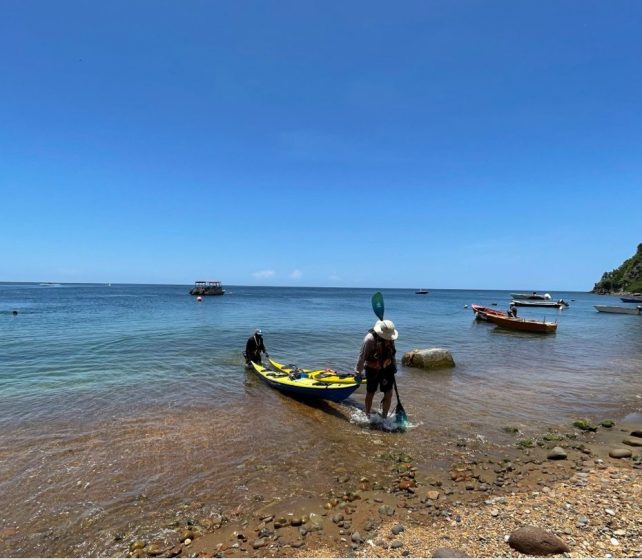 Locals will have access to lessons, tours, rentals, expeditions, and club membership. Plus, they will have a wide range of sea kayaking options — from sit-on-tops to sea touring kayaks to surf skis.

Alleyne is adamant that anyone, regardless of age or gender, can learn sea kayaking. He and Moses, both certified guides on the island, are the ideal choice for persons looking to learn while staying safe and informed during breathtaking tours on the water. 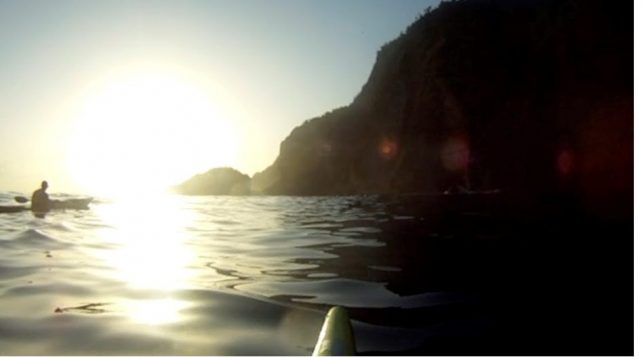 Alleyne is especially eager to offer locals yet another way to stay healthy and learn more about their island. Tours for each person will be based on their individual skill level.

Moses, who has lived and kayaked in Jamaica and St Lucia and now resides in Dominica, believes that the Outdoor Centre will boost adventure tourism and help to promote Dominica as an international sea kayaking destination. 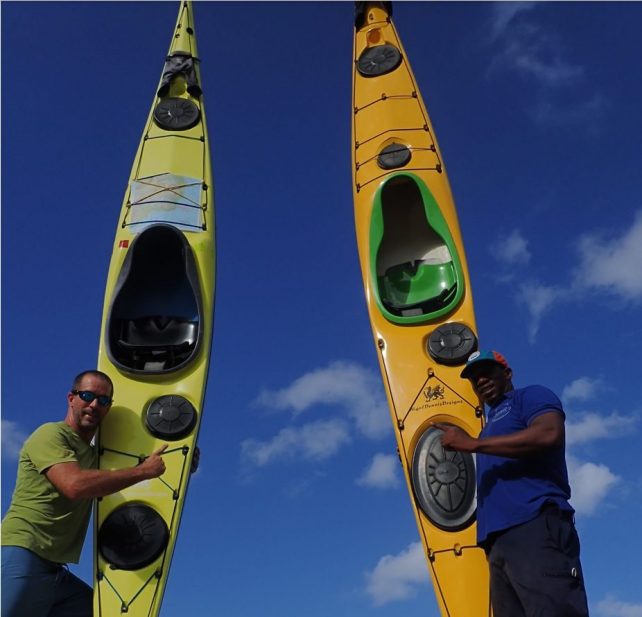 The Outdoor Centre will further partner internationally to become a Sea Kayaking UK Expedition Centre and a Trak Kayak Pilot Centre. Both companies are innovative and holistic in their approach to kayaking, and their boats are high-performance yet vastly different in design from one another.

Finally, Moses and Alleyne would like to give a special shout-out to the young, inspiring kayakers in Soufriere whom they have been training with.

For more information on the Soufriere Outdoor Centre, call +1-767-613-5329 or email SoufriereOutdoorCentre@gmail.com.