Member of Parliament for the Mahaut constituency, Rayburn Blackmoore, has revealed that a little bit over $1.5-million has been spent on road rehabilitation works in Warner, Campbell and Canefield.

On Monday, Blackmoore, who is also Minister of National Security, revealed the projects during a walkthrough with members of the media. It formed part of his mission that is in keeping with a road rehabilitation contract signed in April 2017 at the Mahaut Community Center by Blackmoore and the five local contractors.

At that contract signing, Blackmoore made the promise that through the projects, Mahaut would rise up as the best village in the constituency.

As part and parcel of the already-in-motion investment, the engagement of local contractors and workers has proven to be a “remarkable” action as over twenty-five men are now employed with a source of revenue for their households, according to Blackmoore.

“It is a remarkable improvement to what was previously obtained. Also it is important because we are creating employment; the contractors are local contractors,” Blackmoore said.

According to Blackmoore, in addition to the road projects, there are projects which are already completed including a retaining wall, box culverts and some aspects of roads in ‘Shimen Coway.’

“As I speak to you right now, vehicular access is possible from both sides of that road (in Shimen Coway). We are now spending close to $400,000 to do storm drains in certain locations within the Jimmit housing scheme itself; phase two, and phase three and four, where we are building storm drains to the tune of $326,000,” Blackmoore added.

He described all these efforts as a “tremendous work” that the Dominica Labour Party is doing for development of all communities across the island.

“It is tremendous work we are doing and one has to actually look at what we are doing from a broader perspective of what the Labour Party administration is doing throughout the country where we are actually placing emphasis on community roads, and we have the vision to do all our community roads in the country. So I think it is a remarkable improvement so far,” Blackmoore remarked.

On Wednesday, June 14th, a contract to the tune of $800,000 will be signed for the repairmen of roads in Canefield East and the RBC Housing Scheme. 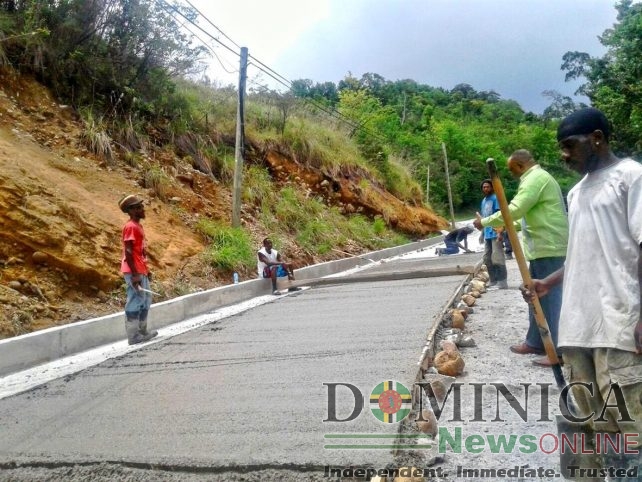