Public Works Minister Rayburn Blackmoore has issued a comprehensive statement seeking to clarify the issue of non-payment to truckers sub-contracted to work on the Lot 2 Project – the $74.8 million airport road from Melville Hall to Pond Casse.

The truckers have been complaining about late payment, and indicated that Project Contractor Emile Gaddarkhan et Fils (EGF) had blamed the government for this.

The Minister’s statement says “Towards the end of May, 2012 the Contractor announced having difficulty in settling the payments due to the workers, truckers and suppliers of the project.   The Ministry of Public Works, Energy and Ports conducted the necessary investigation of the Contractor’s and found out that only one interim payment, the last one, claim #11 was outstanding complaint.  That last claim has since been long settled by the funding agency, AFD”.

“We are however learning of allegations made by the Dominica Tipper Truckers Association that Government has not paid the Contractor, Emile Gaddarkhan et Fils and as a result the truckers cannot be paid. That accusation is false and deliberately bends on misleading the public,” the statement said.

Minister Blackmoore says the truckers ought to know that the Government is not the one paying the contractor for the works on the Lot 2 Project.

He has explained that the contractor’s claims for the works executed are paid directly by the funding agency, AFD “and to date all of Emile Gaddarkhan et Fils claims have been settled by the AFD so there is absolutely no legitimate reason why the Truckers should not have been paid”.

That’s said to be the basis on which Minister Blackmoore advised the truckers “to take the necessary legal action for guaranteeing the settlement of their outstanding claims”.

The $74.8 million airport road project is funded by the Agence Française de Développement (AFD) and was scheduled for completion by this month on June 19.

It involves the rehabilitation of 24 kilometres (km) of roadway.

The government says it now hopes that the project can be completed between August and October of this year, and has employed two other sub-contractors to work on specific aspects (areas) of the project.

The Public Works Ministry has indicated as well, that the government and the Agence Francaise de Developpement are expected to sign a loan agreement for additional works on the Melville Hall to Pond Casse Road today (Friday June 22  2012).

Below is the audited payment on the project as provided by the Director of Audit, Clarence Christian. 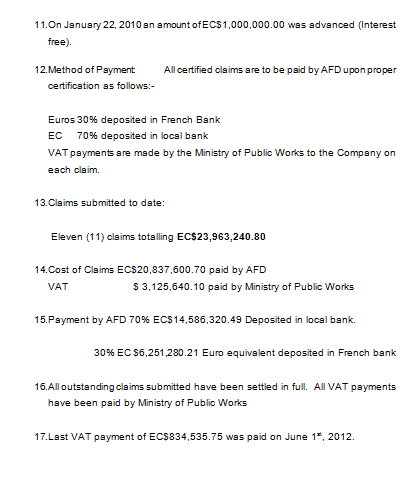