The Sea Defense Wall project in Pointe Michel is a week and a half behind schedule, according to Minister for Public Works Rayburn Blackmoore.

The current standing contrasts favorably with a July 15 report that stated that the works being undertaken there were two months behind schedule and that the contractors were denied their request for an extension from Government.

Blackmoore led a ministerial site visit to the project area this morning and reaffirmed his confidence that the project would be completed on time.

“The last time we came here, the project was two months behind and the contractor had made a request for a time extension of two months and after a review of the project, we concluded that there was no justification for the extension. We were given the assurance by the contracting team that they were going to double their efforts and what we have seen here today is a manifestation of that. Some progress has been made in terms of catching up and in the mean, [the project stands at] one and a half weeks behind schedule, which is remarkable,” he stated.

As to the project itself, Blackmoore spoke of the completion of 400 meters of retaining wall, rising 4.5 meters about the sea level and there are other segments to be completed, one of 290 meters and another 120 meters, for which a funding proposal is being sent to the Caribbean Development Bank.

Blackmoore said, “As we speak, the ministry is doing all the work and the analysis to have a submission to the Caribbean Development Bank, which will be done sometime in December, to get the additional funding to ensure that the entire village is protected. It is a good thing to have a sea wall protecting the road infrastructure but it’s more important that lives and property are indeed protected throughout the length and breadth of this village.”

The minister also spoke of a new public convenience, new road surface, sidewalks and steps to the sea shore as part of the project. 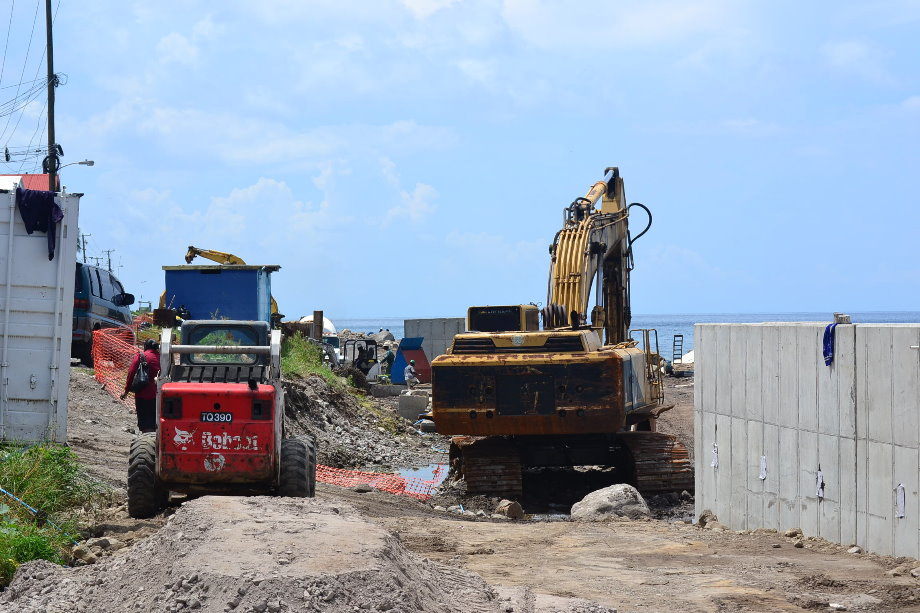