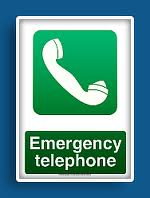 There will soon be a fully functional non-problematic emergency telephone line in place for Dominica.

Government Productivity Assistance Parry Bellot has pledged that the new and improved services will be installed next year.

This comes on the heels of claims that there were difficulties in contacting the fire department during a major fire last month.

“Many Dominicans were very concerned over the recent tragic incident where an elderly person lost her life by fire and from the facts we know it could really be avoided. It has to do with an emergency number for the fire and ambulance and police that don’t seem to be working well,” he said.

He said recently Telecommunications Company LIME issued a statement in the media claiming that the emergency line was in place and working well.

However Bellot said while this is so, the system is no longer appropriate for the environment.

“If we cannot have an emergency line installed that works in the country then there is something really wrong with our productivity,” he explained.