Parliamentary Representative for the Grandbay Constituency and Minister for Culture, Youth and Sports, Justina Charles is pleased with the progress of work on the Lalay Road in the community.

Charles has stated that the project does not only involve the resurfacing of the road but also the building of drains and sidewalks.

Charles is excited about the project, just like her constituents.

“I can tell you the Grand Bay people are very excited about it, it has really enhanced and brought a different look to the community; it has enhanced the whole aesthetics of the village,” she said. “We are hoping that as soon as the fellows have completed the drainage we can move to the do the sidewalks.”

She pointed out that he road now is much larger, the surface is neat and all new and the drains are covered so we will have less exposure of waste.

“I think that in itself is good for the community,” Charles stated.

She further described the project as deserving and timely.

“We started from meeting stone to get to the Pierre Charles Boulevard. So this project is really something that was long awaited and I think so far from all talks and as I go through the constituency the people are really excited about the end, it is not even completed but the near end product they are very happy about what they are seeing now,” she remarked.

The project involves the replacements of aged water pipes, complete rehabilitation and resurfacing of the road, construction of covered drains and construction of sidewalks. 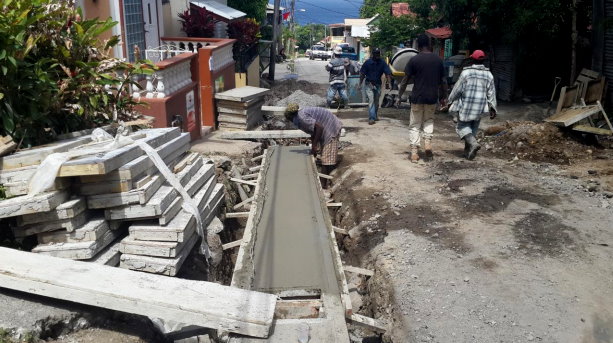