It is being officially called the Dominica/China Friendship Bridge.

That announcement by Prime Minister Roosevelt Skerrit, as the government officially opened the new bridge located next to the Roseau Market.

He called it an important piece of infrastructure in Dominica’s road network, that would help to ease the traffic congestion in the city of Roseau.

The EC$8 million dollar bridge was constructed with Chinese grant funds over a 17 month period.

In recognizing the assistance being given Dominica’s road network, PM Skerrit told Wednesday’s opening ceremony that Dominica would continue to support Beijing’s “one China policy”.

He also disclosed that other manifestations of Chinese help to Dominica in the area of housing would soon become evident, while also reiterating that plans to construct a new Chinese-funded  state of the art hospital for the country would soon be implemented.

The prime minister told the nation too, that Dominica’s first premier would be honored by having one of the country’s main highways officially named the “Edward Oliver Leblanc Highway”.

He was referring to the West Coast road, the Roseau to Portsmouth highway, currently being rebuilt by a Chinese company with funds provided by Beijing.

Public Works Minister Rayburn Blackmoore who also addressed the bridge opening, said the government has been coping with the major challenge of rehabilitating the island’s roads.

He said the administration had moved to address an earlier situation in which only 25 per cent of Dominican roads were in fair condition, and a mere two per cent of feeder roads (on which agricultural produce is transported from the farms) were fit.

The minister said the government was making an all out attempt to bring the country’s road network to an acceptable standard. 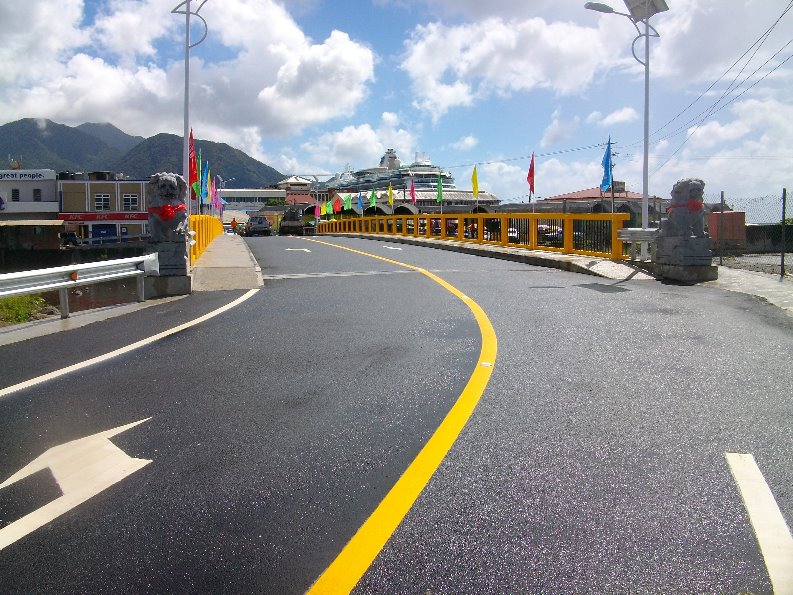