The construction of a new police station in LaPlaine is being described as a massive investment in the southeast of Dominica by Parliamentary Representative for the LaPlaine constituency, Petter Saint Jean.

He stated that the construction phase of the project is having a significant impact on economy of LaPlaine and surrounding villages. He attributes the economic benefits to the number of young men from LaPlaine who are employed on the project.

Saint Jean has lamented the need for an appropriate structure to house the LaPlaine Police Station. He said that for too long dwelling houses were rented and converted into police station in his constituency.

“It was just a few years after Hurricane David that the Police Station was demolished,” he noted. “Today we see the construction of a $3.2-million facility in the community and this, indeed, speaks volumes of the kind of investment that the Government, the Labour Party Administration is making in the lives of the people of the south-east community and, of course, the various communities around Dominica by extension.

“The construction of this new facility will continue to improve the social order in the areas of Morne Jaune, Riviere Cyrique, Grand Fond and Rosalie, (Terre Femme),” he said. “I think it is something that is worth doing in the sense that the old structure was not serving the constituency before that well especially when you look at the whole question of having to attend court and even having to read into their concerns because the activities at the police station was basically dislocated in the sense that you had the courts in one building, you had the police station in another building being rented. Now that a new building is going to be constructed, you are going to have all the services being offered in one central building.”

The new La Plaine Police Station is being financed through a loan from the Dominica Social Security and will cost $3,244,137.12.

The firm of A.K. Henderson Ltd. has been awarded the construction contract for the project.

The new station has two buildings. The main building is a two-level structure, with the lower level housing administrative offices, holding cells and magistrate’s court. The upper level will house the male and female living quarters. The second building will serve as the Inspector’s quarters. 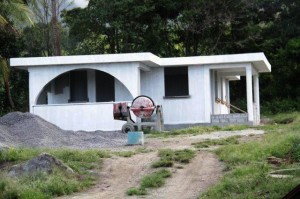