Plans are in place for the East Coast Road Works project in order to improve the resilience of the existing roads and to provide an alternative route between Roseau and the airport.

The presentation of the Preliminary Design of that project was made by Project Manager of Tecnica Y Proyectos, S.A (TYPSA), Alfonso Medina at a press conference held in the Ministry of Finance conference room on Wednesday.

The project, which covers 43.3 km of road, focuses on four segments will include slop stabilization works, pavement reconstruction, clearing of culverts, river dredging, erection of retaining walls and gabion baskets which will be installed in some areas just after the Emerald Pool.

The segments are as follows:

“The cost of the civil works under the immediate works is $4.7 million, with additional works Post-Hurricane Maria expect to cost in excess of $3 million, that’s $7.7 million in investment,” he said.

According to him, in February of 2018, his Ministry through the Disaster Vulnerability Reduction Project (DVRP) and TYPSA signed a contract for the provision of Pre- Engineering and Design Services for the roads.

“The project started many months ago but Tropical Storm Erika had a severe impact on the implementation pace of the project and that is one of my key area of concern, not just for this project but I think we need to step-up the pace on implementation in Dominica because we are not in normal times,” he explained. “We have just a short space of time to see how we can bring Dominica up to speed and break a record compared to after Hurricane David… where it took us about a decade to really come back on stream.”

Isaac continued, “We need to surpass where we expect to set our goals and objectives.”

He said the complete rehabilitation of the east coast roads is a flagship resilience infrastructure project.

“I took the opportunity to visit the project on three occasions without technical people, just touch base, talk to people in the community, ask them if they are aware of who is doing the project and how the project was going on,” he explained. “I also visited the project on Sunday before I did my address in Parliament…”

He pointed out that the policy decision by Prime Minister Roosevelt Skerrit for Dominica to become the first climate resilient country in the world places the project outcome at the foremost of national development.

He mentioned that particular attention must be given to the Kalinago, Castle Bruce, and San Sauveur during the project.

Isaac noted that it is also prudent to consider the environmental and social consideration and the country’s vulnerability to flooding, land slippages, “because these things pose a major threat also, so we really need to focus on it while we are trying to build a stronger better infrastructure.”

“An infrastructure that will be resilient to those potential risks we need to mitigate against,” he said.

Moreover he encouraged the consultants to take local knowledge of the area into consideration for the development of the designs so that we can avert historical vulnerability.

Meanwhile, Medina said he visited the island two and a half months ago and presented the preliminary assessment report which was the first step in the design services contract.

According to him, the geometric design was analyzed, “we identify the technical risk of the existing one and the ones that may arise when we impact with our new infrastructure…”

He mentioned the main objectives of the project is to improve the resilience of the existing roads, provide an alternative route between Roseau and the airport and to design speed is not such a priority if it involves an excessive investment.

On March 16, 2018 TYPSA delivered the Inception Report with the purpose of describing the activities carried out during the first fourteen (14) days of the contract services and presenting a general approach for the development of the design.

On May 10, 2018, the Consultant delivered the Preliminary Assessment Report with the purpose of describing the activities performed during the first sixty (60) days of the contract services.

During the project, works will be done on the Pagua Bay Bridge, Richmond River Bridge, Castle Bruce Bridge, Belle Fille Bridge among other areas in the East Coast. 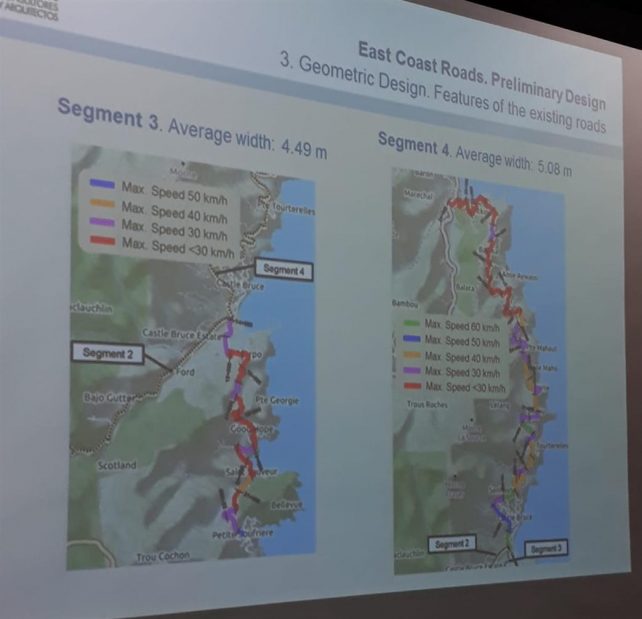 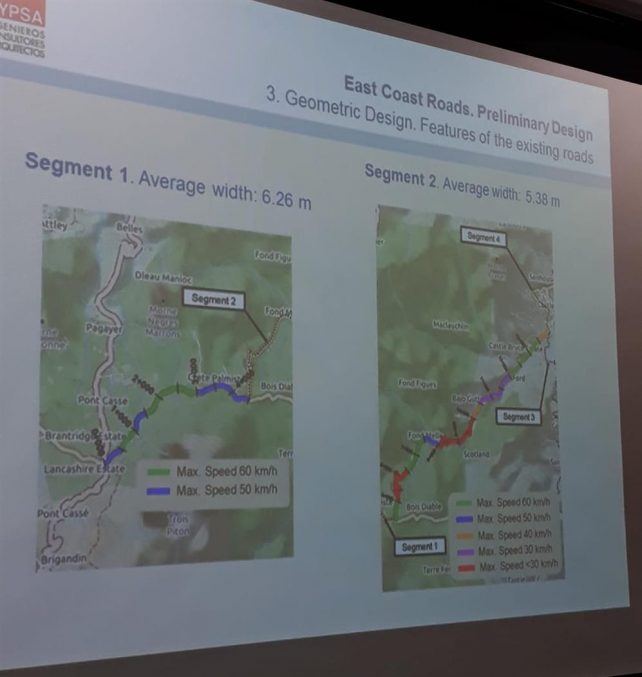