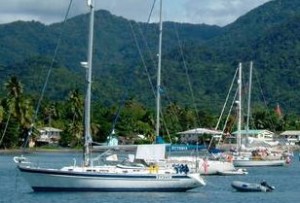 A yachting symposium to critically look at Dominica’s yachting sector and to discuss how it can be further developed was staged on Wednesday 29th May, 2013 as part of activities marking “Tourism Awareness Month”.

The symposium which took place at the Public Service Training Centre (PSTC) in Roseau brought together a number of stakeholders in the yachting industry.

Tourism Minister, Ian Douglas, during an interview with the Government Information Service (GIS) confirmed that the island’s yachting industry has made significant strides in recent years and Government continues to put in place the enabling environment to see continued development of the sector.

The minister disclosed that a proposed Marina Development in the North of the island is one of the key plans of Government to enhance the yachting sector.

“It is the vision of Government to continue to grow the industry and we have been saying for decades that the Cabrits area hold so much potential. This Government is actually making that dream a reality by constructing the Cabrits Hotel and Spa with the help of the Moroccan Government,” informed Minister Douglas.

The Minister continued that it’s the Government’s intention to fully explore the potential of the proposed Marina Development.

“We intend to go further with that by looking at the whole aspect of a Marina Development at the Cabrits so that we ourselves can grow the yachting sector and that is the vision of the Ministry of Tourism and the Government of Dominica, to the point where we can expand our market share to allow us to become one of the leading yachting destinations in the Caribbean,” the Minister said.

Hubert Winston, Managing Director of Dominica Marine Cente,r delivered a presentation at Wednesday’s symposium on the potential opportunities within the yachting sector.

In an interview with GIS he said efforts are continuing to ensure that Dominica is not left behind in that sector.

“The focus really is actually the yachting sector in Dominica, where we are, what we are missing and basically what we need to do to get to that other point. There are many opportunities in the yachting sector and we want to ensure that we do not leave any stone unturned,” Winston stated.

Winston noted that marketing is critical if the sector is to move forward.

“We have to target the market and do a good job of it because our competitors are moving full steam ahead and we do not want to be left behind in that sector because basically it’s an open water sector, so we feel we can do also as good as them to bring in the targets that we are trying to attract,” he said.

Winston cited that the yachting industry has tremendous potential and locals should seek to tap into the many opportunities.

“There are so many opportunities in the industry. For example skilled personnel for painting, marine works, engine works, vanishers, sail makers, captains, crews just name it.  There are so many aspects of this industry that would be of benefit to us. In my presentation earlier, I sought to identify the many opportunities which exist that Dominicans can tap unto and gain employment,” revealed Winston.

Dominica’s yachting industry is primarily managed by the private sector with support from the Ministry of Tourism, Customs and Immigration, and the fisheries Division.

The Portsmouth Association of Yacht Security and the Dominica Marine Association are two examples of Associations currently providing professional stakeholder-based security initiatives for yachts in Dominica.