All secondary and Dominica State College (DSC) students have been given the assurance that they will receive tablets promised by the government during the course of this year.

Minister for Education Petter Saint Jean revealed at a press conference that the process for delivery is “well underway.”

“As it relates to the tablets, we made a promise to the Dominican public that we would deliver tablets to first of all the secondary and college students,” Saint Jean said. “The process is well underway and in time the tablets will be delivered to every secondary school student and every student of the Dominica State College (DSC). The promise was that it would happen this year and it will happen this year.”

At a Dominica Labour Party rally in the run up to general election last year, Prime Minister Roosevelt Skerrit said the tablets would actually be delivered by January 2015.

“Ladies and gentlemen, I have been speaking to you about the fact that this Labour Party has secured a commitment for the purchase of 7,500 tablets for our school children,” he said to thunderous applause. “That is the tablet our children will be receiving that our children will receiving come January 2015 …”

However, after the election, the story of the tablets took another turn.

In January the Minister for Information, Science, Telecommunication and Technology, Kelver Darroux said that the “proper mechanism” was being discussed to have them delivered.

He stated that these tablets will be given to all secondary and college students on island but did not give a specific time frame.

The promise of the tablets has been the subject of numerous jokes on social media, while others have dismissed it as just political gimmick.

See a social media meme below on the subject. 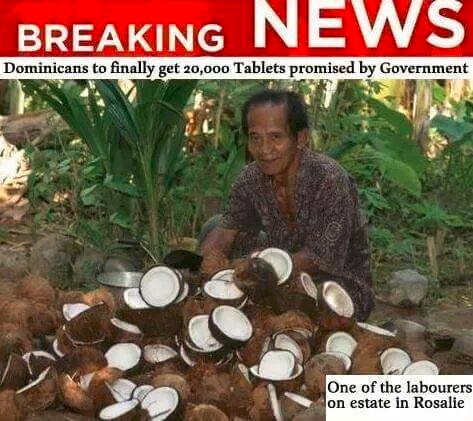