Keeping it 100 Good Things Campaign has donated back to school supplies to all of the children who attend the Sineku Primary School in the Kalinago Territory, Dominica.

Mrs. Jno-Finn was born in Castle Bruce, Dominica and was orphaned at an early age. She learned early in life the value of a supportive community and has fostered community for the entirety of her life. Education is important to Sylvina Jno-Finn and she would frequently provide childcare to community children while their parents worked. Sylvina has a signature phrase, “You have to get something to do.”

Sineku Primary School, located in the Hamlet of Mahaut River in the Kalinago Territory, educates 109 students. Dominica is the only Eastern Caribbean Island that still has a population of pre-Columbian native Caribs, who were exterminated or driven from neighboring islands.

The Kalinago Territory is home to the indigenous people of Dominica. Mrs. Jno-Finn is a native of Dominica and her children and grandchildren wanted to honor her by also providing needed educational materials to the first inhabitants of the island.

“We only had 30 backpacks left from Castle Bruce and we knew it wouldn’t be enough for the 109 students at Sineku. So the children and grandchildren formed another drive to provide school supplies including notebooks and pencils to all 109 students. The 30 backpacks will be given to the current senior class,” said Erma Green, granddaughter of Mrs. Jno-Finn.

Kathleen Jno-Lewis, Principal of Sineku Primary School said, “The principal, staff, students, and parents of the Sineku primary school extend their sincerest gratitude to the Keeping it 100 Good Campaign for its invaluable contribution. We deeply appreciate the donation and assure them we will make good use of the materials received.” Kenny Lecointe, community leader and coordinator of the distribution activity added, “I was quite elated to be a part of this momentous occasion. I must say a big thank you to the Jno-Finn family who saw it so fitting to invest in our youth.” 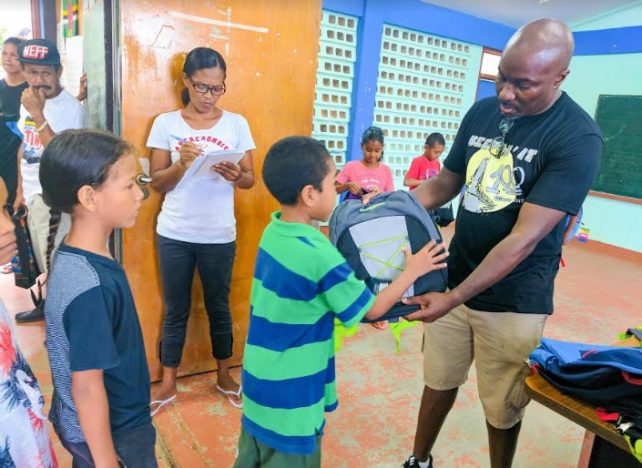