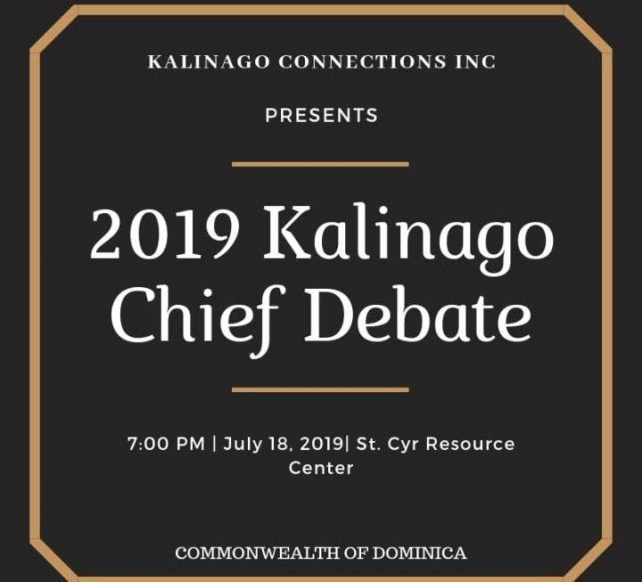 Residents of the Kalinago community are gearing up for the Kalinago Chief Elections officially scheduled for July 22nd, 2019. As a small Indigenous community, the Kalinago Territory is required to elect a Kalinago Chief and Council every five years, as the local governing body of the 3700 acres of communally occupied land.

The election season of 2019 is peaked with a new wave of excitement as seven (7) candidates have put themselves forward to contest the position of Chief. As part of the race, one female candidate is also vying for the position expected to be occupied from 2019- 2024.

The demand for quality leadership and better representation at the council level has contributed to the high response rate of candidates, most of whom proposes to revolutionize the future developmental thrust of the community.

Ahead of the elections, the Kalinago Connections Inc, a local NGO based in community has taken up the mandate to facilitate the Kalinago Chief Debate, aimed at creating a forum for candidates to articulate their plans and proposals to a wider cross section of the local electorate.

Coordinator of the event, Ms. Natasha Green, indicated that, once approached to identify a suitable NGO to host the debate, the Kalinago Connections Inc was suggested given its ongoing role in facilitating social media discussions of matters pertinent to the community.

According to Ms. Green, ‘facilitating this debate is embraced as an opportunity to extend our responsibility to encourage discussion and the education of our residents.”

“This election is a historic occasion for us as the indigenous people of Dominica, granted that we now have a cadre of persons putting themselves forward with a new zeal to serve and to improve on the shortcomings of our past leaders”.

“Having been privy to some of the propositions by the candidates, we can begin to understand that there is a 2019 and beyond demand for a better Kalinago Territory, a Territory guided by new policies and structured long term initiatives for the holistic development of the area”.

“The debate therefore, will provide the opportunity for the respective candidates to elaborate on their plans to be implemented if successfully elected into office to serve as the Kalinago Chief’.

The program is expected to take the format of the US Presidential Debate whereby each candidate will receive a fair chance to respond to relevant questions. The audience will also get the opportunity to ask questions.

The event will take place at the St. Cyr Resource Center on the evening of July 18th 2019 from 7-9pm.

Dominica News Online (DNO) will stream the event live on its Facebook Page and on the site.