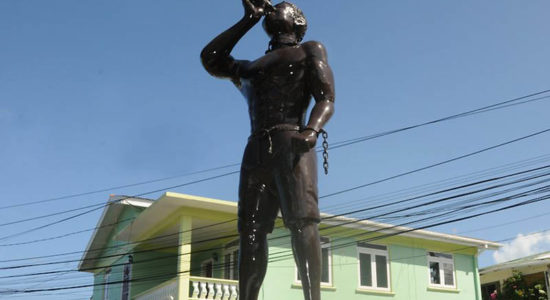 The 2019 Emancipation Day Celebrations have been launched.

The event being organized by the Cultural Division and the Cultural Council in collaborations with other partners was launched at the Old Mill Cultural Centre on Wednesday.

This year’s celebration is scheduled to run from Friday, July 26th to Saturday, August 3rd. with the theme: “Promoting a Culture of Excellence”

Chief Cultural Officer, Raymond Lawrence  who was addressing the ceremony said a series of events will be held to highlight the occasion.

“The first event this year is scheduled to take place from Friday, July 26th and that is the Emancipation Arts & Craft Exhibition,” he said. “On that day, the craft segment of the exhibition will be held downstairs of the Government Headquarters from 9:00 am to 4:00 pm.”

Lawrence continued, “The art exhibition segment will be held here, at the Old Mill Cultural Centre, on the same day but in the evening from 6:00 pm.”

According to him, the works of several local artists and craft persons will be on display.

He mentioned further that the following day on Saturday, July 27th the Cultural Division will be staging an Emancipation Community Showcase at the Pierre Charles Secondary School in Granddbay from 6:00pm.

“This event in Grandbay is a tribute to outstanding women in culture in Dominica, both from the South of the island…,” Lawrence noted.

Performances are expected to come from the Petite Savanne Cultural Group and Dubique bélé Group among others.

He said that on Thursday, August 1st, the cultural division is planning to have an Emancipation Day Fashion Extravaganza with song, poetry and dance at the Alliance Francaise from 7:00pm.

“The fashion show will feature modern creations of our local designers in addition to African and Creole Wear,” Lawrence revealed. “The show will also highlight some of our 2019 Domfesta song participants…”

He said the final event for the Emancipation Day celebrations this year will be the annual Golden Drum Awards ceremony and concert to be held on Saturday 3rd August 2019, at Alliance Francaise from 8:00pm.