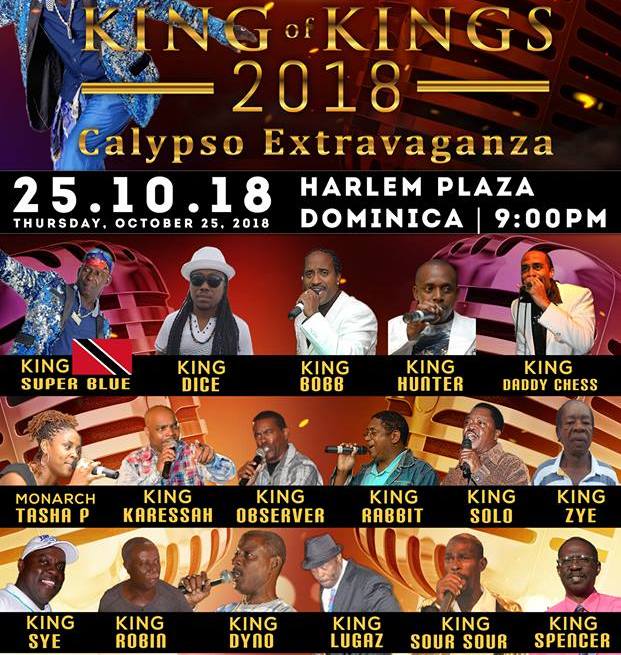 On Thursday 25th October 2018, all roads lead to the Harlem Plaza at 9:00pm for the Reunion Edition of the “King of Kings” Calypso Extravaganza. Calypso lovers who reside in Dominica and those returning to Dominica for the reunion celebrations will get an opportunity to experience an appetizing menu of current and ole school vintage calypso, as E-Dominica Promotions and Productions takes its “King of Kings” event to Dominica.

The “King of Kings Calypso Extravaganza” is a cultural tourism event which has been held successfully in New York annually since 2001. The event exported the Dominican Calypso art form and showcased Dominica’s talent to the rest of the world.  It provided a platform for the Marketing of our island, our national events, artists, and local businesses to a captive audience. It catered to Dominicans and friends of Dominica, who were unable to return to Dominica during the carnival season.  It also offered Calypsonians who would not have normally had the chance, an opportunity to travel to the Big Apple to perform. The “King of Kings” event attracted a substantial cross-section of the Caribbean population. Because of the publicity it got, it created a greater awareness and recognition for Dominica, and assisted in attracting more visitors to our shores.

Calypso as we all know is a unique Caribbean form of music, which has become part of our culture, however, it is most commonly heard during the carnival season. Over the years calypso has not been featured much during our independence celebrations, therefore as we celebrate reunion 2018, this event will not only enhance the reunion calendar of activities but also help in the preservation and promotion of the calypso art-form.