Dominica will be featured in a video game, which is still under development.

The game features a young lady, called Michelle, as she journeys across Dominica in search of adventure.

Below creator, Albert Pierre and CEO of Super Dominica Universe, talks about the game.

“It was something that first started off as just a simple experiment.” Super Dominica Universe CEO, Albert Pierre says “A Platform game featuring the island of Dominica would be nice. Of course programming and distributing an interactive video game for all major platforms (Windows, iOS X, iOS, and Android) may seem like a far-cry from our regular mode of operation but it could happen.

The Super Dominica Universe exits to promote the culture, history and natural features of Dominica in diverse ways. Not only though our mastcot, Super Dominica but ‘other ways.’ And that is just what we intend to do with this.

In addition to the graphic novel which is under development this Video Game (which we do not have a working title for yet) will become a part of our roster of big things to come. The game will feature a young lady by the name of Michelle as journeys across the island of Dominica in search of adventures. Michelle is also featured in a short animated film we worked on recently found here.

The game will have all included in a typical Platformer Game but the set will be Dominica. Example of major Platform Games in the genre would include Sonic the Hedgehog or Super Mario. But we don’t seek to make exact carbon copies of these two releases. While they may have set the stage in many ways, we are looking to make something Fresh, Tropical, Vibrant and Caribbean. I just think it’s about time that more became pioneers in the area of technology in Dominica.

It’s already happening. It needs to happen more. It will not be only about programming and tech although those are important. We are hoping to employ some good writing to make the story of the game as convincing as possible. Preliminary tests already show that the game runs fine on mobile devices such as the Samsung Galaxy S3 so it’s just a matter of getting the funding, putting pen to paper and heads together for an explosive result.

Some things that would be needed to for it blow up would be music (primarily beats from local artists), Voice actors (not only for Michelle but other Non-Playable Characters), Dominican Historians that the game scenes are somewhat consistent with real life, Writers, Art Directors, Animators, Programmers, etc. All these kinds of people can be found in Dominica so why not? I always say that if you want to make a major impact you don’t look at what everyone else is already doing. You focus on something that no one has tackled yet and put all your effort into it. That’s how you become a pioneer.

The concepts are not written in stone so we cannot give specifics on what to expect yet but I confident that this could happen.” 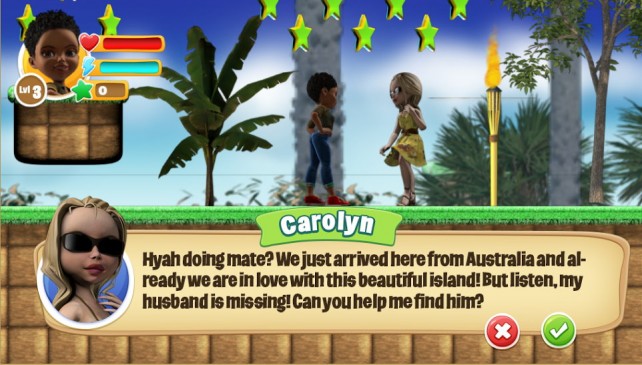