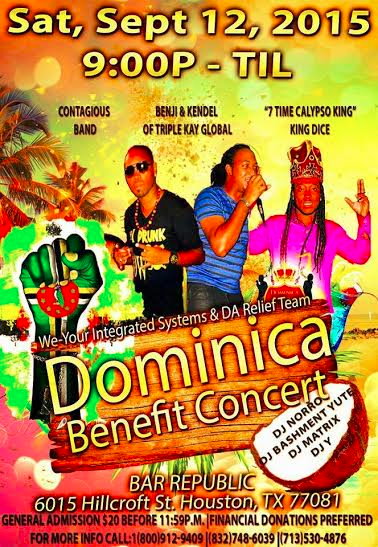 This Saturday, September 12th, Team Dominica Relief Houston will host a Benefit Concert in their continued effort to assist with the much needed aid for Dominica.

Donations in cash and/or kind will be collected at the concert, which is endorsed by the Dominica Houston Association.

The Team was formed following the unfortunate passing of Tropical Storm Erika, which caused infrastructural damage and loss of lives across the country.

The Houston community has since been overwhelmingly responsive to the cause, and working alongside Caribbean International Shipping & Moving and the Dominica Houston Association were able to successfully ship a first container stacked with relief supplies.

Team Dominica Relief intends to ship out a 40-foot container by the end of September. In that regard, we urge all Dominicans and non-Dominicans alike, to come out to support a worthy cause as we all work in unity to restore our island home to its former glory and beyond.