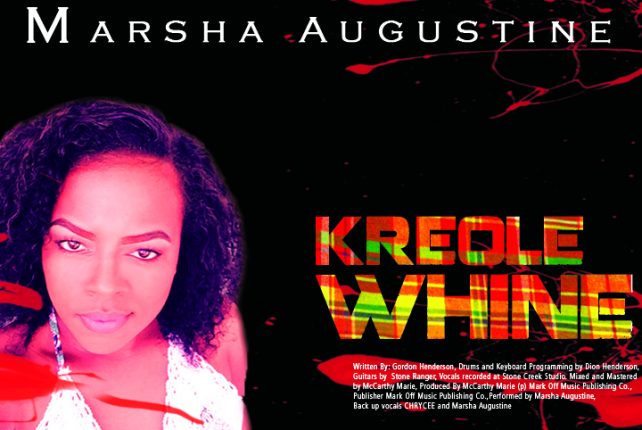 In April Marsha released a Soca track entitled “No Worries” on the Daydream Riddim. Now she is back with that svelte look and warm sexy voice.

Her new single is “Kreole Whine” written by Gordon Henderson, Mr. Cadence-lypso himself. As you can tell from the title the track is a saucy number destined to liven up the Kweyol Season and beyond.

The song can be described as a clever blend of Groovy Soca with a modern Cadence-lypso groove featuring some wicked rock guitar licks that gives the song a decidedly international appeal.

The production of Kreole Whine involved the input of a number of persons. Gordon Henderson wrote the song; his son Dion Henderson programmed the drums and the keys at his studio. The vocals were tracked by Andrew “Stone Ranger” Bellony who also played guitars and at his Stone Creek Studio at Copt Hall. Mc Carthy Marie had production duties and mixed and mastered the track. Backing vocals are by Marsha and Chrycee, a St. Lucian singer.

Marsha is due to perform at a number of events for the season and the public should look out for her live performances of this number which is destined to get you moving.

Take a listen below.