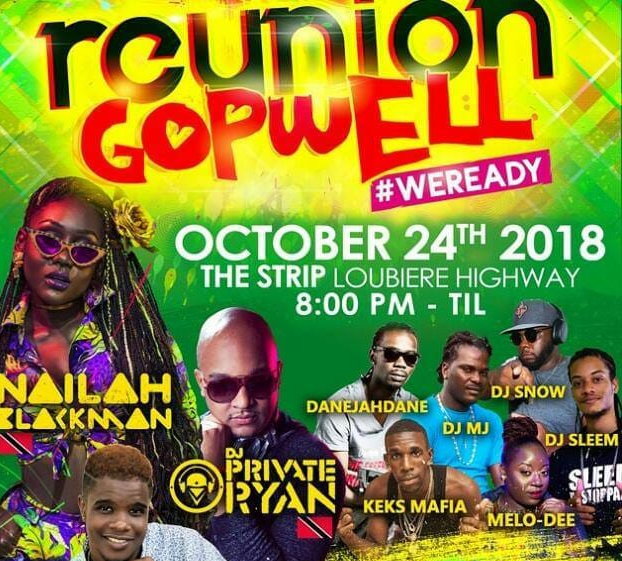 Preparations for the staging of the first-ever ‘Reunion Gopwell’ is “on point” so far.

This was according to the event’s organizer, Dane ‘Danejahdane’ Smalling who spoke to Dominica News Online during an interview on Monday.

The event is scheduled to take place at The Strip on the Loubiere Highway on Wednesday, October 24th from 8:00 pm.

“Everything is on point so far,” he said. “We had our first person coming in which was LJ Fabulous of St Lucia who came in on Monday [22nd October] he is already here enjoying himself. Tomorrow [Tuesday, October 23] we have the rest of them coming in.”

A part of the ‘gopwell’ concept, Danejahdane said the date of the event marks 10 years since he has been living in Dominica and that in itself is special to him.

“I came to Dominica during a reunion year and that is the liveliest I have ever seen Dominica,” the organizer, who is originally from Jamaica, said. “So here is it once more where we are celebrating 40 years this time around.”

He continued, “The date is very special to me… I have been there for 10 years doing my thing, so I am really doing this in celebration and of course trying to reach out to the diaspora who will be here during the independence celebrations.”

He went on to say that persons in the diaspora are always seeing his events online but have never been able to attend because of the timing.

“This is something that I really want them to attend,” Danejahdane noted.

He described the event as being predominantly Soca, “a culture trade show” as it will feature local artistes as well as regional and international artistes.

Danejahdane made it clear that he will rename the event next year as “Independence Gopwell” since reunion comes every 10 years.