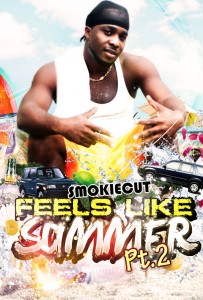 According to the young artist, who is originally from Goodwill, the song is about being grateful for summer days. “It speaks about having fun with your real friends on the beach during the summer time, its summer time and it comes once a year,” he said.

Smokie Cut noted that the song  is part two of another summer song released last year.

He said that although he wrote the song for someone else to sing, he was encouraged by his friends to perform it himself.

Jean Jacque said he took his friends advice since the person for whom the song was written could not perform it the way he wanted.

The artiste hopes to release mix tape “Above Expectations” by the end of August.

Smokie pointed out that he enjoys writing and he claims he writes a new song almost everyday.