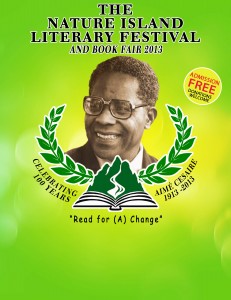 Education Minister Petter St Jean is making a plea to students to take greater advantage of the annual Nature Island Literary Festival and Book Fair. The 6th festival opened its doors to the general public on Friday 9th August, 2013.

According to Saint Jean the festival can be described as the most prestigious literary festival in the OECS region and affords students studing Literature the opportunity to meet great Caribbean writers, poets and others. He added that the students will also be able to explore the works of these great Caribbean people.

Saint Jean said “The festival therefore provides an outlet for the literary skills of students, it takes into consideration that we need to foster and develop a cadre of poets for the future”.

The minister also indicated that by bringing the Festival to Mero beach on Sunday is one way in which budding writers and poets can be inspired.

He noted further that the festival has great literary and educational value and said “the festival compliments the efforts in formal education in the development of the creative writing skills of students and the mastery of language, poetry and prose.”

Meanwhile, Senator Alvin Bernard who was representing the Prime Minister remarked that consideration should be given into the possibility of resurgence of the writers guild.

The Nature Literary Festival and Book Fair is this year giving special recognition is being given to Martiniquan writer Aime Cesaire.

It will continue into the weekend.

Co-ordinator of the festival Alwin Bully told the audience at Friday’s opening that it was extremely difficult to host 2013’s festival because of the economic recession. Bully pointed out that since most of the festival is sponsored by the private sector, sponsorship was not as forthcoming as other years.

Several regional writers and guests are on island to participate in the festival including president of the Regional Council of Martinique, Serge Letchimy and award winning Slam poet Whitney Greenaway who is of Dominican parentage.

There will also be open mike presentations and the festival will climax with a Mero Lyme after party with bon fire, food and music at the Mero Beach on Sunday 11th August.