The Extasy Band, of Petite Savanne, has been recognized by the University of the West Indies (UWI) Open Campus Dominica 2015 Events Management Class for its dedication to the field of music, culture and involvement in Tropical Storm Erika relief activities.

The band received that award the ‘UWI Benefit Concert’ and International Food Fair recently held at the Peebles Park in Roseau.

“We admire your tenacity and resilience in light of the challenges posed to your band following Tropical Storm Erika. Your aim to entertain the public through music continued along with your efforts at relief concerts to raise funds for those affected by TS Erika,” the letter said.

Antoine told Dominica News Online (DNO) on Wednesday that the award came as a surprise.

“It came as a surprise because seeing that we are a young band, we were not expecting to be recognized so soon,” he said. “It looks like we are doing something good so that’s why the recognition came.”

He said receiving the award from UWI is a great achievement.

“The University of the West Indies is one of those universities in the world and to be recognized by the institution is a big recognition for sure,” Antoine stated.

He revealed that the band will be taking a pause during the Carnival season in order to put a new album together.

“By the middle of next year we want to have our album out,” he noted.

The band has so far hosted a successful series of relief concerts, first at the Windsor Park Sports Stadium on October 3, which bagged at least $16,000, followed by fundraising events held in Martinique from October 9 to 11 and Grenada on November 7.

The band has been on a drive to raise funds to support residents of Petite Savanne who were affected by Tropical Storm Erika. 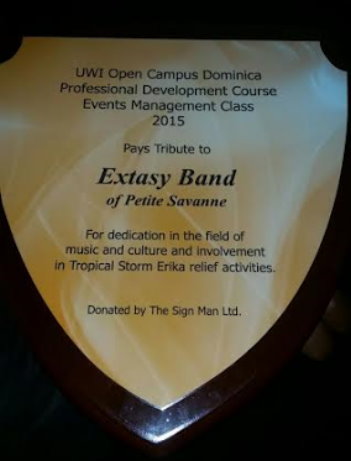