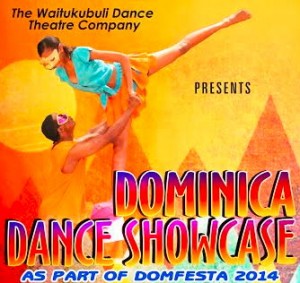 The event, which is a repeat of a show staged last year November, is scheduled to take place at the Arawak House of Culture on Friday April 25th and Saturday April 26th 2014 from 8 p.m.

There will also be a performance at the Arbeedee Cinema in Portsmouth on Saturday May 3rd 2014 from 8 p.m.

The latest dance production from the Waitukubuli Dance Theatre Company will feature new dance presentations by the Senior, Intermediate and Junior sections of the Company.

The Artistic Director of the Dance Company says that this year’s production will be a very exciting and colourful one and he is inviting the general public to come out and support dance in Dominica and to also enjoy a relaxing evening of wonderful and thrilling entertainment.

The dance company was founded in 1971 and has staged numerous shows in Dominica and in several Caribbean countries and also outside of the region.

The total membership of the Company now stands at about 50 strong.

The group’s most recent performances this year took place at the Carnival Queen Show and the Teenage Pageant.