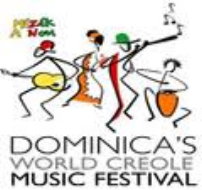 The Dominica Festivals Committee has officially unveiled its line-up and some of the plans for the 15th edition of the World Creole Music Festival (WCMF), to be hosted at the Windsor Park Sports Stadium from 28th – 30th October 2011.

The Festival, which was launched at the Krazy Coconutz, earlier this evening, is themed “Make a Memory, Come Dance With Us!” and is set to feature some of the premier international bands of creole music such as Kassav, Third World, UB40 and Carimi, while continuing to provide a stage to showcase local Dominican talent.

Keynote speaker at the launch, Tourism Minister Ian Douglas, urged Dominicans to embrace the creation that is the WCMF and to support the festival in its entirety.

He stated, “As we launch this 15th WCMF, let us once more embrace what we have created, let us feel proud of our collective endeavors and achievements. Let us now begin from today and onwards to prepare to attend all three nights of this festival. Let us come out and support the festival, helping to sustain it for another 15 years and ensuring our artistes find a place to expose their craft to the world, while at the same time providing us with the opportunity to witness top-class acts from all around the world.”

This year’s WCMF line up is as follows: