Police say arson is suspected as the cause of a fire in Roseau over the weekend which destroyed three dwelling houses and caused damage to three others.

That’s according to Police PRO Inspector John Carbon who said in a release sent to Dominica News Online on Monday evening that the matter was under investigation.

Public Relations Officer of the Fire Department, Wayne Letang, told Dominica News Online that the fire department responded to a report made at 4.19 on Saturday afternoon about a house being on fire on Hillsborough Street. However, he said when fire officers arrived on the scene they were quickly confronted by a scenario in which the flames had migrated from the first house to six adjacent buildings. Ultimately, three of the seven affected houses were destroyed, with the other three receiving various degrees of damage.

Investigations by the fire department revealed that the fire started in a house owned by Violet Cambran which was occupied by Dorothy Joseph. Another dwelling house belonging to Henevin Joseph and occupied by Marshall Joseph and Kenny Antoine was also consumed by the fire. The third house to be gutted by the fire belonged to Pauline Ferdinand and was at the time, occupied  by Janice Scotland and Joel Webster.

Other home owners in the area whose houses were affected are Cecil Ferdinand, Ernie Jean Jacques, Cecil Joseph Jnr.  and Olive Williams.

Letang told DNO that the police were involved in ongoing investigations into the cause of the fire and the occupant of one of the houses which was destroyed, was assisting police with their investigations. He said the cost of the damage had not yet been ascertained. 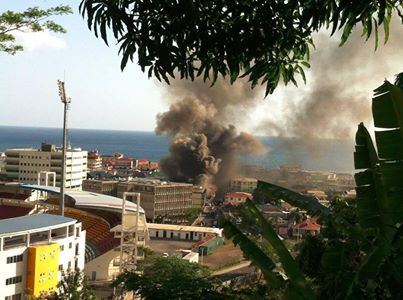