A former resident of the Grotto Home for the homeless has been left stranded and without food for three days while the acting supervisor of the institution says her hands are “tied”.

Thaddeus Jno Charles, a 57 year old man who is incapacitated, says “I am hungry and needs a place to sleep and food to eat and the people at the Grotto say they cannot help me.”

However Grotto Home’s Acting Supervisor claims that Jno Charles who left the home on October 8, 2012 “left on his own and to now assist him it must be a board’s decision.I don’t own the place and it is guided by laws, rules and regulations and he is a smoker, it’s a small place he left on his own and to have him back has to be a decision of the board, I cannot take on my own and feed him and have him back,” she told DNO.

When DNO visited Jno Charles he was lying on some pieces of wood in the rain outside in the yard. “I am hungry, I need a place to sleep and food to eat…..I walked from Salisbury to Roseau and I have been there begging but they say they have no place for me,” he said.

This prompted the DNO reporter to get him some much needed food.

one person with knowledge of the institution told DNO that since the Grotto is a home for the homeless, he ought to have been fed. “It is hurtful to see that they basically refused to feed the man….you don’t need a board decision to feed someone who is homeless and hungry,”

Another source suggested that there may be more to the story than meets the eye as the Grotto operates a soup kitchen on a regular basis and Jno. Charles could at least have been fed from that facility.

DNO will continue to follow the story and bring you more information on what happens to Jno. Charles. 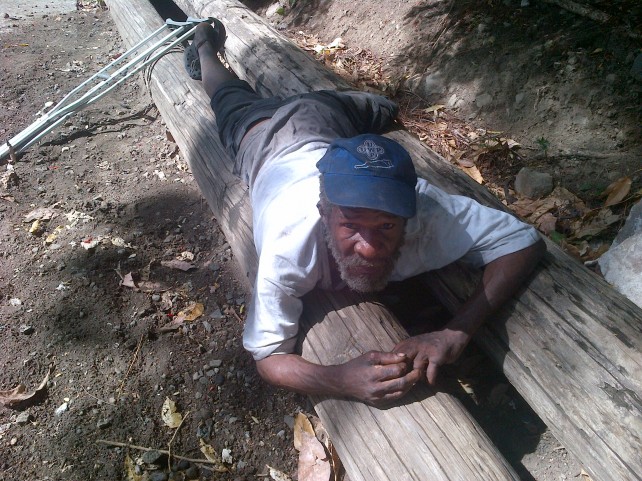