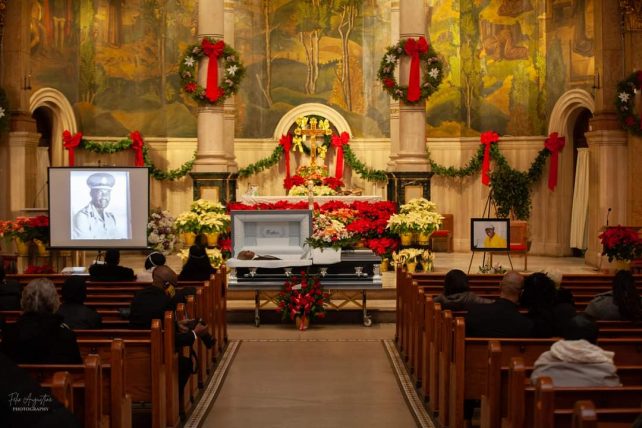 What can one say that has not already been said about the late Ensley Luke Pierre, a treasured and beloved husband, father, grandfather, humanitarian, humble, strict and firm. Well it is no surprise that those left to carry his legacy deem it, “a mighty shoe to fill.”

Born under the sign of Leo, to his family, he was truly a lion in more ways than one. Known locally as “Sargie,” “Daddy” or “Pierros”, Pierre was one of 17 children born to Noelise (Ama) Pierre and Stedman (Steddy) Pierre in Berekua, Grand Bay.

Having achieved the highest level of success among his siblings and becoming one of the learned professionals that Grand Bay claimed as its own, Pierre was a proud son of the community and contributed to the most positive image accorded to Grand Bay outside Dominica.

Upon completion of his education at the Grand Bay Primary School, and later at the Roseau Secondary School, his life of service to the community began. He became a teacher and taught at several schools in the Southern district and later  joined the Dominica Police Force and served in several villages around the Island.

While serving in the village of Marigot, he met the woman who would become his wife for 66 years, Leona Josephine Nelson Pierre, and they raised a total of 24 biological and adopted children as their home was considered a haven to many, and anyone who needed family and a place to rest was welcomed.

Though many regarded him as a strict disciplinarian, to his children, they were equally accepting of the fact that much of their accomplishments came as a result of their strict upbringing as they were raised on the principle, “spare the rod and spoil the child.”

“I grew up my entire life trying my best to see whether I could do him justice and whether I could be the gentleman that he raised, and I think I achieved that,” Charles Pierre, son of the late Ensley Pierre told Dominica News Online (DNO). “There was no doubt in his mind that you were on this earth to do good and he would hold us to that commitment so, we had to, as children, try our best to live up to that expectation.”

His daughter, Keturah Pierre said some of the values that her father taught were the importance of family, the need to give back to the community and the value of an education.

His last daughter, Patricia Pierre Gilkes, is hoping to be the same type of parent to her children as her father was to them.

“What I do remember about Daddy is [that] from a little girl, I would be everywhere with him and as busy as he was, he always seemed to have time for his family. There was never a time I would go to him, or call him that he would not make time for me,” she recalls.

According to his children, Pierre knew the importance of setting a positive example in the community. Publicly, he was deliberate in the way he carried himself. Though not outwardly boastful, he was a self-styled “Man of Class,” who walked at a brisk pace, with style and a distinctive gait and even his handwriting according to them, is a testimony to this neat personality, “his signature had flair and pizzazz.”

As Pierre moved up in his career as a police officer, he was promoted to Senior Training Officer at the Regional Training Centre in Seawell, Barbados and relocated there with his family from 1963-1968.

Upon returning to his native Dominica, he served briefly as the Director at the National Youth Camp, Londonderry, Dominica (1971 – 1972) before using his expertise to establish the Morne Bruce Police Training School.

Due to his stellar work in the region, he was appointed Commissioner of The Royal St. Lucia Police Force from 1976 – 1979 at a time when there was a confluence of activities emerging in the region in the 1970s. St. Lucia had political unrest and there was a mistrust in the police department and Pierre was singled out as the person who would go there to manage the police department which was in total decay.

For his successful intervention, in 1978, Pierre was presented with the Queen’s Birthday Honours Award in St. Lucia, as a reward and highlight of his good work.

Pierre again returned to his beloved Dominica as Superintendent of Police and would shortly after be appointed as Commissioner of the Commonwealth of Dominica Police from 1983 until 1992.  During this time, he was also appointed Security Liaison Officer (Interpol) with responsibility for the Caribbean and Latin America (1984-1986).

According to his son, Charles, as Commissioner, Pierre led with an independent mindset, unwavering commitment to rule of law and human rights, and placed a high priority on discipline in the Commonwealth of Dominica Police Force which many believe brought a level of stability in the police force during its turbulent years.

He said his father wanted to instill a sense of honor in police officers who had been given the responsibility to protect citizens and held each officer responsible for his action.

“The officers were very clear on what his expectations were of their behavior in the community and I think just to survive that work in such a time, he had to be firm as there was no other way around it. He had to be very grounded in who he was and had to set a course of action and expectation from his policemen,” Charles explained.

Following his retirement from the Commonwealth of Dominica Police Force, he continued his community-oriented contributions by serving on the Board of Directors of the Dominica Port Council, National Bank of Dominica, the Diocese of Roseau, the former Saint Alphonsus Credit Union, Dominica Cooperative Credit Union League Limited and the Caribbean Confederation of Credit Unions. He was the Chairman of the Industrial Relations Tribunal for 18 years, making him the longest serving Chairman in the history of the Tribunal and was also a member of the Dominica Rotary Club, among others.

In 2012, Pierre received the DEF Lifetime Award for service to the private sector in the Commonwealth of Dominica and was awarded for active participation, leadership, and exceptional contribution to the development of labor-management relationships.

He continued to exuded bravery outside of the police force, surviving cancer multiple times.

“When he was first diagnosed with prostate cancer he did all that he had to do until the doctor  said he was free of prostate cancer. And he continued with his life until there were other instances when he was inflicted but coming towards the end of his life some of those cancerous cells may have spread to other parts of his body so I think that was what ended it all for him,” Charles revealed.

Daughters, Patrica and Keturah characterized him as a fighter throughout the whole ordeal.

They said he took his medication on time and he did everything that the doctor told him to do to the extent that he arranged his travel plans to Dominica and the US so that he could receive treatment prior to leaving.

The siblings thanked their sister Anthea Pierre who took on the role as caretaker for their parents.

Meantime, friend and former colleague of the late Pierre, Evander Joseph, says he regarded the former Police Commissioner as a fair and honest individual who carried out his function with a high degree of efficiency.

“He was a very good man. He dealt fairly with everyone and if someone broke the law, police or civilian, he would ensure that this person was held accountable. He was very efficient in his mannerism and his leadership skill was among the best I experienced during my time as a police,” Joseph remarked. “Pierre was very careful in the way in which men under his command served and he was a no nonsense Police Officer and everyone respected him for that.”