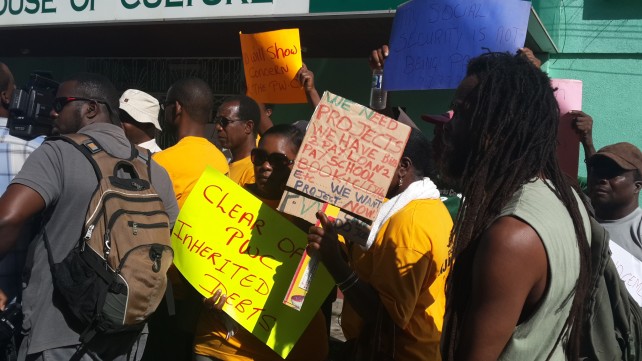 Workers employed at the Public Works Corporation (PWC) demonstrated outside the Financial Center in Roseau on Tuesday to express their grievances on a number of issues.

General secretary of the Dominica Public Service Union (DPSU), Thomas Letang, said the matter has to do with what he described as “a lot of issues, a lot of problems.”

He told the media that the union has been doing everything possible to have the issues addressed, but to no avail.

“We have gone as far as sometime in May to have a meeting with the honorable prime minister to resolve these issues,” he stated. “We have tried on several occasions to meet with the board of management and we have failed in our efforts … the problems continue.”

He said monthly employees have not been paid their wages from last month.

He said the government is owing the PWC $3,137,691 and noted the corporation is being sidelined for certain projects.

“So it is a lot of issues, a lot of problems and we are just trying to see how this matter can be resolved,” he remarked. “The union has tried everything before we could really arrive at this stage where we are at now.”

Letang and two workers eventually met with prime minister, Roosevelt Skerrit, but the meeting was not long.

“We met with the prime Minister and he has cabinet this morning, so we couldn’t have a long discussion.” Letang explained after the meeting. “However he met with us and the prime minister has indicated that after the budget he wants to meet with us.”

He said the date of August 4 has been set and the Skerrit “will meet with the union, along with management, board of directors and the employees.”

He said the metting will discuss “all the issues which are affecting public works as well as to discuss what it is that government expects of the employees.”

“So the issues are already with the prime minister,” Letang said.

But the date is not going down well with the workers who argue that August 4 is a public holiday.

“August 4 is a holiday, that doh making no sense. What are we going to feed our children? That is just bogus,” they said.

Letang, in his attempts to pacify the workers, informed them that he will look into the date.

“We will call the prime minister,” he said, adding that the workers should not keep on “throwing our differences in public.”

But the workers were undettered.

“Empty barrels cannot stand. How we gonna go to work if we cannot yam? We need money! We need a solution to the problem! Now! Now! That cannot suffice us! That cannot please us! What about my bills in my house? SAT is going to cut me today; I have my children at home!” were some of the statements coming from them.

They eventually returned to the site of the PWC.