Professional photographer based in Toronto, Canada, Simon Shirley, is to release a panoramic photo book on the southern community of Soufriere entitled ‘Soufriere: Land of Angels’.

The book features poetry, written by Shirley, himself, to accompany the photos.

He told DNO on Tuesday that he began the project in 2013, hoping to showcase the beauty of Soufriere, the home of his ancestors, and completed the prototype in the same year.

“It’s targeted towards people who’ve never been to Soufriere — people who are tourists from all over the world — and the title of the book is to entice them, first of all, to pick it up… so that they can open the first page, and discover where is Soufriere: Land of Angels,” he said. “I’m hoping by the end of the book, they want to come to Dominica to see the Land of Angels. After that, it’s up to the people of Soufriere to represent, and become angels.”

The author, trained in Journalism and Media Management, revealed that work is still being done on the pocket-sized work.

“I will be adding pages to it, such as Scott’s Head, and the sulfur springs, and the Kubuli Trail,” he noted.

Shirley explained that the poetry present in the book was inspired by the beauty of Soufriere, captured in the pictures, and the emotions evoked by the photos.

“They say ‘a picture says a thousand words’, but maybe a paragraph will help the pictures say those words. And I’d like to think that the words are what you feel when you look at the pictures,” he stated.

To emphasize, he read a line from his work, describing the golden sunset on the Caribbean Sea: “The visage of God smiles down on the land of angels, saturates the terrain with awesome wonder.”

The author hopes to collaborate with Discover Dominica Authority (DDA) to publish his book. 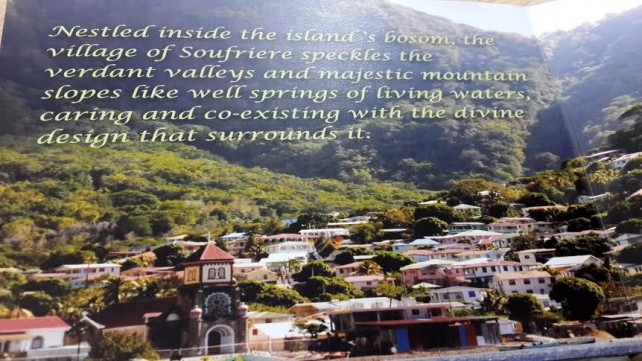