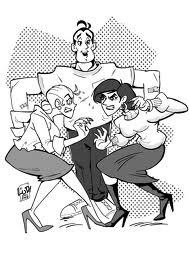 Patrons of the 15th Annual World Creole Music Festival received additional entertainment on Night Two when it appeared that a top government minister was at the center of a tug of war between his two girlfriends.

Apparently both women wanted to be the “main squeeze” for Night Two, which is deemed the most popular segment of the event.

“You not going nowhere with that ..(obscene language removed).. woman tonight….I thought you say you finish with her,” one of the women yelled while pulling her man, the minister, closer to her.

Onlookers became curious and started to surround the trio.

The minister did not only looked embarrassed but tried to keep the two women from ripping each other’s hair off.

The minister eventually walked away with his female pick for the festive season.

This begs the question whether the call by Reginald Austrie for additional security for government ministers should in fact be implemented.