President of the Concern Citizens Movement (CCM), Loftus Durand, has said he is very happy over the turnout for protest action outside of Parliament on Thursday and said more are being planned to call for the resignation of Gerard Burton as Chairman of the Electoral Commission.

The organization called the protest mainly over proposed amendments to the House of Assembly (Elections) Act and the Registration of Electors Act. Although the amendments were not taken to parliament, the CCM still went ahead with the protest.

“In terms of me being satisfied or not, I must say there is always room for improvement in terms of numbers for that protest but from where the movement is concerned, we are very happy over the turnout yesterday,” he said.

Durand said the protest created an impact in terms of the people being present in the flesh outside of Parliament to highlight issues that are happening in Dominica as it pertains to the governance of the country, “especially where our electoral system is concerned.”

“The message was sent loud and clear yesterday by the protestors in a very peaceful way,” he said.

Durand noted that persons turned out in large numbers with their placard, sang songs and voiced their concerns.

“The Parliamentarians who were there, the Government of the day did get the message that certain things will not be tolerated as it pertains to our democracy in Dominica,” he remarked.

Durand continued, “There was the strengthening of that message in that there was a walk around town with the protestors and a lot of onlookers and that created an even greater impact in and around the city.”

Meantime, Durand revealed that the CCM plans to demonstrate against the Electoral Commissioner, Gerard Burton for the manner in which the CCM says he is handling the country’s electoral matters.

“We are a patriotic group always seeking to address any injustice in Dominica and so what we have decided apart from going and stand outside Parliament for our rights, we had on the cards that we will be demonstrating against the Electoral Commission at their office in Turkey Lane, Roseau,” he revealed. “Very soon from now, we will be outside the electoral office demanding that Mr. Gerard Burton resigns and our electoral business continues in the benefit of all Dominicans in a very fair and free way.”

He added, “We got the nod from the people yesterday and so we will be protesting against the manner in which, especially the Chairman, has been handling our electoral matters in Dominica.” 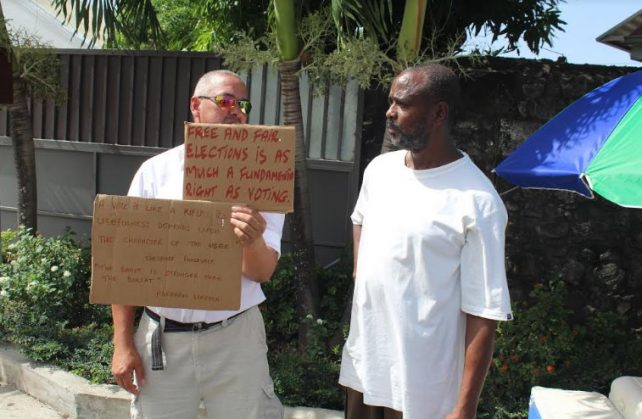