The Association of People with Disabilities in Guadeloupe has provided relief supplies to its counterpart here in Dominica following the passage of Tropical Storm Erika.

Dried food supplies and adult diapers were among items received by the Dominica Associations of Persons with Disabilities’ (DAPD) to assist members who were affected by the storm.

“This donation relief supplies will be distributed to them primarily and to ensure that it could bring some form of relief to them because this is the way we can help them,” Executive Director of the DAPD, Nathalie Murphy, said at a handing over ceremony held at the DAPD office in Goodwill on Tuesday.

According to her, this is the first organization that has come to the assistance and aid of the DAPD after the storm.

“We are very thankful for what the association in Guadeloupe has done for us,” Murphy stated.

She pointed out that following the storm, officials at the association made contact with all its members and information gathered show those in Petite Savanne and the west were affected.

Zig Jean-Claude, who represented People with Disabilities in Guadeloupe, said after seeing the devastation caused by the storm, he decided to assist.

“I spoke to my boss and the Managing Director general and they told me yes Mr. Zig, go and do something for them,” he explained.

Jean-Claude revealed that three weeks later he received the supplies for Dominica.

“It was very important for me to come to Dominica for distribution for the Association of Disabled People and Alpha Centre,” he noted.

The Association of Disabled People in Guadeloupe also donated one wheelchair and two walkers to the DAPD.

Charlene Charles of Petite Savanne was the recipient of the wheelchair, while the two walkers were distributed to two other members of the association.

Charles’ mother, and member of the DAPD, Marline Laurent thanked the association for its donation. 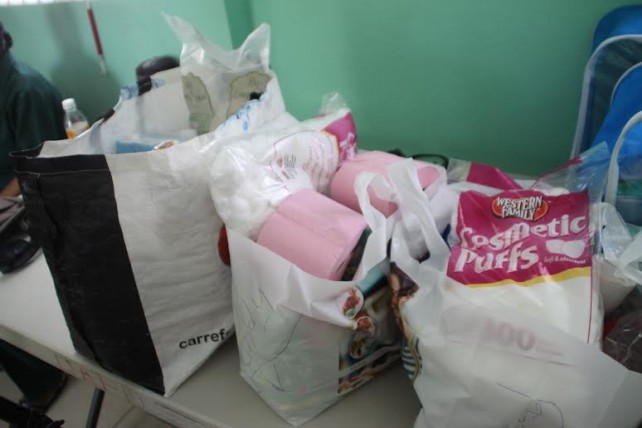