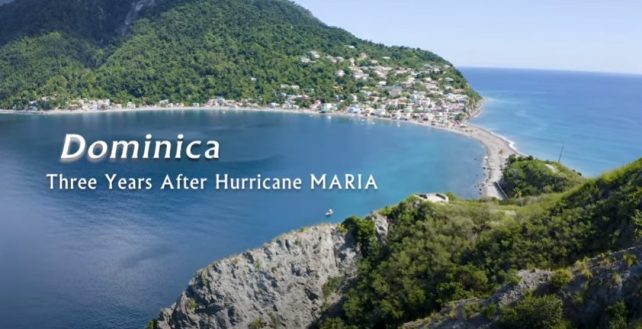 Inspired by how Dominica has bounced back three years after the devastation caused by Hurricane Maria, Veteran photographer Derek Galon decided to create a documentary portraying the country’s past and present features.

Galon, who won the Tagore Film Festival Award for 2020 for his film ‘Dominica- Three Years after Hurricane Maria’ has been residing in Dominica for over 6 years.

According to him, the documentary is a tribute to all Dominicans who worked together and helped to rebuild the country.

“Right after Hurricane Maria and seeing all the devastation, all around us I just felt that I had to film it, just to have it registered as a documentary footage,” he told Dominica News Online (DNO) during an interview.

Galon continued, “Now three years after Maria, suddenly I realized going through my footage I saw some places right after Maria and I compared it with what I see today, and I didn’t even realize how much Dominica had actually moved forward and recovered.”

He said that gave him the idea of doing the film as a commemorative piece, “comparing how it was before and then how we slowly developed.”

Meantime, Galon said he plans to do a similar documentary during the 5th Anniversary of Hurricane Maria.

“I will be tempted to do another similar film during the 5th Anniversary of Hurricane Maria and I expect that it will be even more significant; of course, if we don’t get kicked by another Hurricane next year,” Galon observed.