A Dominican diplomatic mission in the United Arab Emirates (UAE) is being formed and will be operational soon, Prime Minister Roosevelt Skerrit has been quoted as saying.

A report by the Global Banking and Finance Review said that the Prime Minister attended a seminar recently in the UAE hosted by the Dubai-based AAA Associates, an immigration services company which says it specializes in the most in-demand areas of immigration and citizenship by investment.

The report said he was accompanied by Emmanuel Nanthan, Head of Dominica’s Citizenship by Investment Unit.

“High demand and interest from the UAE significantly contributed to the UAE-Dominica bilateral relations, which lead the Dominican government to establish Dominica Embassy in Abu Dhabi and Dominica Consulate General in Dubai,” Skerrit was quoted as saying. “The diplomatic mission is under the formation process and will be operational soon.”

The report went on to say the Prime Minister told participants of the seminar that investment and minimum taxation in Dominica, savings by immigrants are multiplied as compared to other countries.

“The country offers full residence status and dual citizenship, with the right to live and work in Dominica and there is no requirement to reside in Dominica before or after citizenship is granted,” he said.

According to the report, “this provision suits the UAE Investors and Businessmen as they can reside in UAE, continue with their business activities and still have the option of getting 2nd Citizenship and Strong Passports.”

Imran Farooq, Chief Executive Officer of AAA Associates, was quoted as saying, “Citizenship by Investment in Dominica is a way to avoid time-consuming paperwork and immigration red-tape when planning the 2nd citizenship. For example, a third-country national acquiring the citizenship opens up entire EU and over 100 countries to do business and live a secure and happy family life.”

Farooq thanked Skerrit and Nanthan for attending the seminar.

“We are honoured and thankful to the high officials from the Commonwealth of Dominica who have flown in the UAE to address AAA Associates’ seminar and personally meet the investors here. Their presence is a great endorsement to the efforts done by AAA Associates in attracting people to the Dominican citizenship and ensuring the programme has Dominican government backing with assurance of investment protection,” he said.

There have been no official statements from the government on this matter. 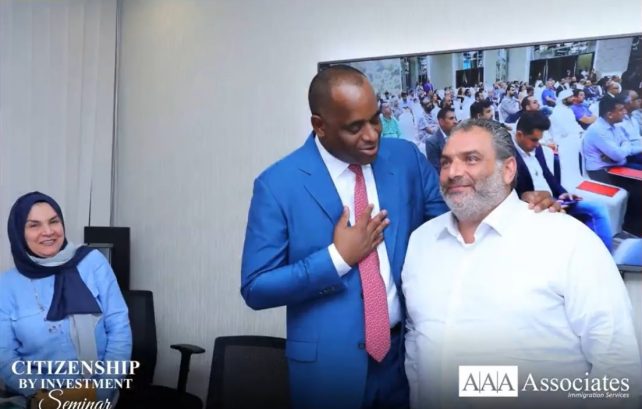