As the Dominica Watersports Association (DWA) launches the 23rd annual Dive Fest, DWA President, Daniel Perryman has stated that it is imperative this year’s event be successful, in order to remain at the “head of the pack” in the Caribbean.

This is now particularly important with the inception of the first-ever St. Lucia Dive Fest, and hindrances to Dominica’s tourism industry, he said, at a press conference held to discuss the event.

“The DWA’s pride was [that] Dive Fest was the only one of its kind in the Caribbean. Now, this is no longer the case,” he explained. “And with the difficulty of airlifting to Dominica, and other hindrances to the overall development to the tourism industry, we’re now facing dive fest competition with our neighbor island, St. Lucia; and it will not stop here.”

The Lucia Tourist Board recently announced the island’s first Dive Fest, to be held from September 10 to 17, 2016. The island boasts of several dive sites easily accessible by boat and shore.

Meantime, Tourism Minister, Robert Tonge, stated that although water sports contributes greatly to the tourism sector and the national economy, there is potential for a 20-percent increase to the annual 3,000 diving visitors.

“Historical data shows clearly that divers are, in fact, the most faithful and loyal tourists to our shores,” Tonge elaborated. “Currently, Dominica welcomes approximately 3,000 diving visitors to Dominica. And, there is a great potential to increase this number by at least 20-percent in the next coming years.”

In 2015, Perryman announced plans to expand the reach of the annual Dive Fest, regionally and internationally, in order to bring more divers to Dominica, in the region of 5,000 by 2016.

Tonge divulged that the government “has potentially approved” an increased budget for marketing the island, to ensure that the individuals are encouraged to come to Dominica. Improved air access is a key step to achieving this goal, he said.

Additionally, the Minister commented that several individuals will undergo training and retraining, to guarantee that “all persons who are going to be touching these visitors are trained, to ensure that the visitor gets a much better experience.”

Dive Fest kicks off with a Happy Hour at the Fort Young Hotel, on Friday, and will span from July 8-17, with several activities in villages around the island. 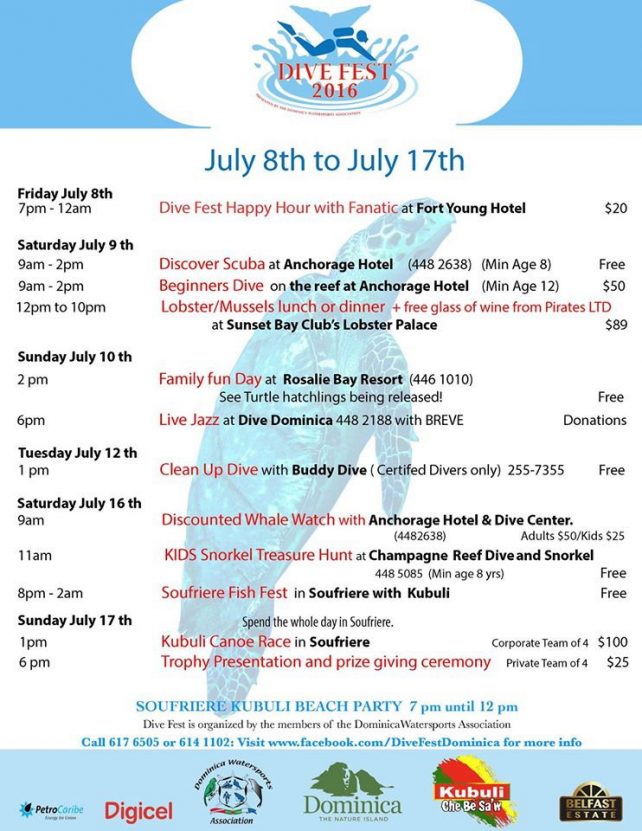