An Emergency Response System which it is said, will contribute greatly to the safety and security of citizens, has been officially launched in Dominica.

The Emergency 911 (E911), as it is called, is an initiative of the National Telecommunications Regulatory Commission (NTRC) and is an integrated 911 system for emergency calls to the police, fire and ambulance services.

The emergency 911 centre will be housed at the Police Headquarters in Roseau and the system will also be installed at the Princess Margaret Hospital. It employs eight persons to fully operate it and costs $1.8-million.

“This emergency response system will contribute greatly to the safety and security of citizens and visitors alike,” Minister for Information, Science, Telecommunications and Technology, Kelver Darroux said while addressing the launching ceremony at the Fort Young Hotel on Friday.

He noted that the response center will serve as a central hall to respond to all emergencies and the initial goal is to significantly reduce the time it takes to respond to an emergency.

Darroux said further that the 911 Emergency Response Centre is equipped with the latest E911 System.

“There are five stations manned with a 911 response operator,” he explained. “All police and fire stations are also equipped with the E911 system. This is to allow staff at those stations to have visibility and information on all emergencies regardless of the location of that emergency.”

He said the system has “selective call transfer” which allows the E911 operator to transfer the call to an ambulance.

Additionally, Darroux noted that ambulances have been upgraded to include mobile devices with the latest GPS technology.

He said that at all times, the E911 operator is able to know the location of any ambulance or police vehicle in order to know which ambulance or vehicle is closest to the emergency.

Automatic location identification is another feature of the sytem.

“This provides the E911 operator with an automatic display of the caller’s location from both wireless and fixed networks,” Darroux explained.

He noted that if the caller is unable to respond to the E911 operator, that operator can trace the caller or the incident and send the nearest available ambulance or emergency service responder.

“The E911 system has the capability to support over 500 calls on a daily basis,” Darroux noted. “The system is also installed at the Princess Margaret Hospital and whenever a call is dispatched to the ambulance, the staff on duty at the Princess Margaret hospital will know that the ambulance is on its way, as well as having the information and condition of the emergency ahead of time.”

Darroux urged the public to refrain from making “prank calls” to the 911 number.

Working side-by-side with the NTRC on this project is the Ministry of Justice, Immigration, and National Security.

The E911 service is a Universal Service Fund (USF) Project, in collaboration with the Government of the Commonwealth of Dominica. 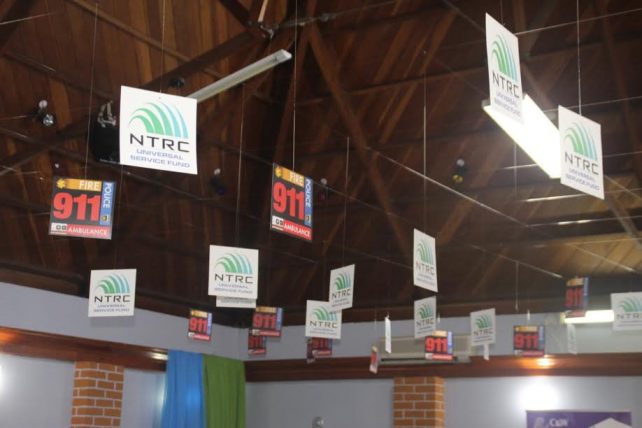