As the restoration of the Roseau Roman Catholic Cathedral continues the Government of Dominica has made a significant contribution of half a million dollars towards that project.

The reconstruction of one of Dominica’s oldest buildings began in 2012 and is expected to cost an estimated $8-million.

“The contribution to the efforts is in the amount of EC$500,000 that would be our contribution and of course as the Lord continues to provide for the state where the state can assist further the state will try to assist,” he said.

The prime minister explained that since the Roseau Cathedral is one of the main attractions for tourist in the country the state felt it was obligated to assist in its renovation.

“Many tourist who come from either the cruise ship or stay over, make it to the cathedral and so it is part of the historical landscape and also our tourist attraction,” he stated. “I understand that there always has to be separation of the state and church but one can all agree that we cannot do without the presence of the church in the state.”

He added further that it is important for the government and the country to recognize that presence of the church is important to the state.

“Dominica has been affected by the global and economic crisis but by the grace of God we have been able to hold our own and continue to do many things for our country and for citizens of this country. These are trying times,” the prime minister said.

In the meantime Bishop of the Diocese of Roseau, Gabriel Malzaire, thanked the government for its contribution to the project.

“We do appreciate this very kind gesture of the government and we know that it will not go without rewards,” he said. “We know that the Heavenly Father sees what you do and I’m sure as he is looking down upon us He will see to it that you are given an abundance in the future.”

Bishop Malzare explained that Lot 3 of the project has just been completed.

“Lot 1 was the removal of the roof and the replacement of all the furniture,” the bishop stated. “Then the second Lot was preparing the structure for this renovation work and now we are just completing Lot 3. Lot 3 entails the entire retrofitting of the foundation. So what you are seeing here right now; trenches were dug here and reinforced concrete was placed and of course the concrete columns were changed.”

He pointed out further that almost half of the work is completed but a lot more needs to be done.

“The 4th Lot is the placement of the frame for the roof which is on order right now… so we should be receiving the frame very soon,” he said. “By summer the frame should be up and the covering will follow soon. Of course for every Lot we need a good injection of funds.”

Although the project is expected to cost about $8-million, Bishop Malzaire said that he expects that cost to increase.

He said close to $5-million have been raised already.

Photos below show ongoing construction on the Cathedral. 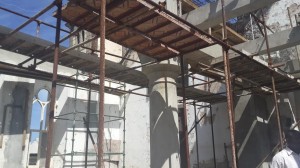 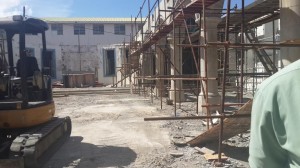 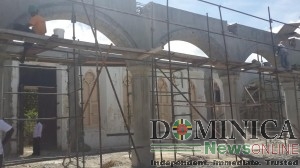